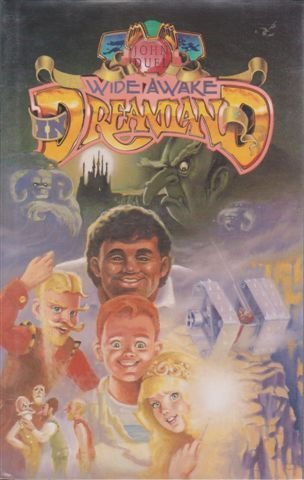 When nine-year-old Eddie catches Sandy, the sandman, Sandy takes him on an adventure in Dreamland where they search for a wizard named Beni who is the only one who can save Eddie from Mortimer, an evil warlock who wants to steal Eddie's imagination

Gr 5-6-- Nine-year-old Eddie catches a tiny Sandman in his bedroom and is transported by him to the country of Sandmen, Dreamland. Unfortunately, because of a spell put on the magical sand of Dreamland, he has arrived there in a waking state, which makes him vulnerable to the attacks of the evil warlock Mortimer. The baleful villain plans to steal Eddie's imagination, killing him in the process. To break the spell and return home safely, Eddie embarks on a dangerous journey with his own personal Sandman and other companions he picks up on the way, encountering flying sharks, a small giant, and the most powerful wizard in Dreamland, who turns out to be a little girl in a frilly blue dress. The final showdown pits Eddie and his friends against Mortimer in the warlock's own castle. Although the book has an appealing, snappy title and a number of interesting paradoxes, it is marred by pedestrian writing, forced attempts at humor, occasional bad grammar, and annoying dialect (``I thoughtcha saidcha saw sharks before''). It is a collection of clever ideas, poorly executed. --Lyle Blake Smythers, Library of Congress, Washington, DC FOREMAN, Michael & Richard Seaver. The Boy Who Sailed with