Paul Bunyan How a Terrible Timber Feller Became a Legend 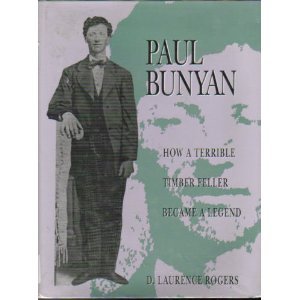 Among hundreds of fanciful and contrived Paul Bunyan tales, this book stands out since it tells how a legend grew from a newspaper story in  the Oscoda, Michigan, Press in 1906 to an illustrated story in the Detroit News in 1910 and a poem in American Lumberman magazine in 1914. When the Red River Lumber Company of Minnesota hired artist W.B. Laughhead to design ads using Paul Bunyan the caricature took shape in the American consciousness and has continued growing over the decades. The greatest and best-known folklore figure in American history is Paul Bunyan. This book tells how that amazing fact came to be, in fact, that Paul Bunyan was based on a real lumberjack. Fabian "Saginaw Joe" Fournier, the "big black Frenchman" as he was called, came to Michigan from Quebec, Canada, in 1865 as the end of the Civil War sparked timber cutting in virgin forests. Fournier became a camp boss in mid-Michigan and spent summers in Bay City, which had been part of Saginaw County that stretched from the middle of the state north to the Straits of Mackinac.When he was murdered on a Bay City steamboat dock in November 1875, newspaper stories spread the tales of the brawling Frenchman. Added to Indian stories of giants from prehistory and lumberjack yarns spun around campfires, the legend coalesced and rose, like smoke from Aladdin's lamp, into a genie that captured American imaginations like no other figure ever has.The original Laughhead art from the University of Minnesota Library and the original poems and stories that made the name Paul Bunyan world famous are included in this classic recounting of how a legend was created. His strength and timber cutting became legendary and his brawls were so memorable one was featured in an oil painting. That monumental tussle was with Silver Jack Driscoll, a 6-2, 210 pound giant from Alma, at the Red Keg Saloon in Averill at the booming grounds near Midland.

If you think Paul Bunyan and Babe the Blue Ox are totally imaginary, you're in for a surprise: both are based in reality. Rogers traces their actualities . . . and some of the early Bunyan tales as well, enabling the reader to see how easily exaggeration came to the lumbermen. It's all very worthwhile for those seeking the roots of our country's greatest tree feller. -- Booklist, American Library Association, 1993

1. Paul Bunyan How a Terrible Timber Feller Became a Legend

2. Paul Bunyan How a Terrible Timber Feller Became a Legend

3. Paul Bunyan How a Terrible Timber Feller Became a Legend