Items related to FRITS E. LAWAETZ The Bull of Annaly 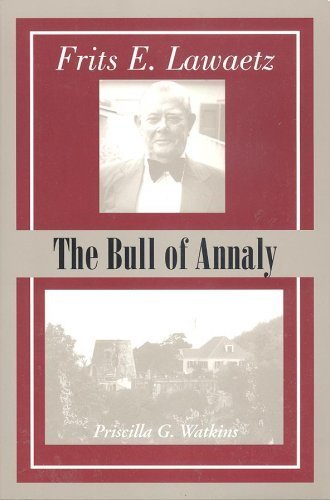 One of St. Croix's most colorful figures, Fritz Lawaetz was born in 1907 at Little La Grange in Dutch West Indies ten years before the United States purchased the islands. After apprenticeship in Denmark and work in Puerto Rico, he came home to St. Croix to marry his childhood sweetheart. Frits was already acclaimed as a successful, respected cattleman who played a major part in developing the Senepol breed, when, at the age of forty-seven, he ran for the Legislature of the Virgin Islands. In spite of the loss of a leg a few years later, he served over the next twenty-four turbulent years, as the islands turned from agriculture to tourism. An elder statesman now, Frits remains convinced that it is each man's duty to serve his country and, by hard work, to make it a little better than it was before he tried.

Book Description Saint Croix Landmarks Society. Paperback. Condition: Good. A copy that has been read, but remains in clean condition. All pages are intact, and the cover is intact. The spine may show signs of wear. Pages can include limited notes and highlighting, and the copy can include previous owner inscriptions. At ThriftBooks, our motto is: Read More, Spend Less. Seller Inventory # G0963639838I3N00