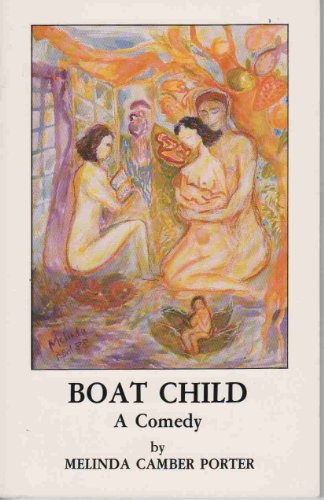 Boat Child is an uproarious comedy set in th amoral, greedy milieu of Holywood in the eighties. It is a tale of irresponsibility gone awry. A successful British screenwriter, married to an American movie star, decides to adopt a boat child. But, neither of them prepare for the arrival of the child the way a parent should!

Author and Artist: British author and artist Melinda Camber Porter began her writing career in Paris as a cultural correspondent for The Times of London. French culture is the subject of her book Through Parisian Eyes (published by Oxford University Press), which the Boston Globe describes as “a particularly readable and brilliantly and uniquely compiled collection.” During her years as a cultural correspondent for The Times of London from Paris and New York, Camber Porter did portraits, interviews, and on-location reports with many of the world’s most recognized and revered film directors, including Mike Nichols, Ingmar Bergman, Michelangelo Antonioni, Michael Apted, Bernardo Bertolucci, Peter Brook, Marcel Carné, John Cassavetes, Liliana Cavani, Costa-Gavras, Federico Fellini, Akira Kurosawa, Louis Malle, Marcel Ophuls, Nagisa Oshima, Alan Parker, Alan Resnais, Eric Rohmer, Bertrand Tavernier, François Truffaut, Wim Wenders, and John Huston. A solo traveling exhibition celebrating Camber Porter’s oils on canvas and works on paper, curated by the late Leo Castelli, opened at the French Embassy in New York City in 1993. This exhibition, sponsored by the National Endowment for the Arts and the French Embassy, traveled to fourteen major cities across the United States through 1997, making a special tour of museums in the western United States to coincide with the publication of her novel Badlands. The novel, a Book-of-the-Month Club selection, set on the Pine Ridge Indian Reservation, was acclaimed by Louis Malle as “an extraordinary book. Its imagery makes one think of William Blake” and by Publishers Weekly as “a novel of startling, dreamlike lyricism.” A film documenting the creation of the paintings featured in this solo exhibition, entitled The Art of Love, shows regularly on Public Television stations nationally and was acclaimed by Billboard as “a well-paced chronicle of personal and professional achievement that will appeal to artists of all ilks.” A collection of her poetry and paintings, also entitled The Art of Love, serves as companion to the show. Leo Castelli wrote: “Not since William Blake has an artist created such a profound relationship between the visual and verbal worlds.” Camber Porter’s paintings have also served as the primary inspiration and as backdrops for several of her theatrical works. She created the backdrops, book, and lyrics for the musical Night Angel, which was originally performed at Lincoln Center in New York City, and the comedy Boat Child, which was performed at the Denver Center for the Performing Arts. She also created the book, lyrics, and backdrops for the rock-opera-in-progress Journey to Benares, with music, direction, and choreography by Elizabeth Swados, which was performed at the Asia Society and Museum in New York City in November 2003.

Shipping: US$ 22.90
From United Kingdom to U.S.A.
Destination, rates & speeds