Items related to Death As A Salesman

Death As A Salesman 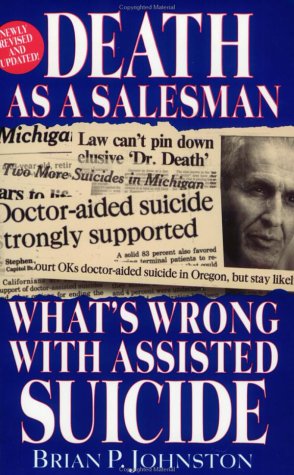 Recognized as one of the definitive handbooks in the battle against assisted suicide, this clearly written analysis examines the issue from numerous perspectives. Chapters include: The story of Jack Kervokian; the history of the Hemlock Society; real answers to pain and depression; hospice care; medical ethics; the social history of assisted suicide; and much more.

Brian Johnston is the Western Region Director of the National Right to Life Committee. He also serves as Commissioner with the California Commission on Aging, as well as on that state's Board of Examiners of Nursing Home Administrators and the board of directors of the National Legal Center for the Medically Dependent and Disabled. He is a frequent advocate for the medically vulnerable and spokesman on the threat of legalizing "assisted suicide." He has appeared on CNN, World News Tonight, McNeil-Lehrer News Hour and many other programs.

"Death As A Salesman is incisive. It's a logical and easy read on a difficult and emotional subject. Brian Johnston drives home, in an accessible and engaging way, why 'Thou shalt not kill.' still makes sense." --Professor David B. Warner, University of Steubenville

"This book is a tremendous resource for anyone called on to address the issue of 'assisted suicide.' And since we're all going to die, and know friends and family who will likely go before us, it is an issue facing us all!" --Dr. Margaret Anderson

"This is what I've been looking for, it spells out all the dangers that I could see, but couldn't easily explain. I'm going to be giving copies away." --Susan Singleterry

Death As A Salesman