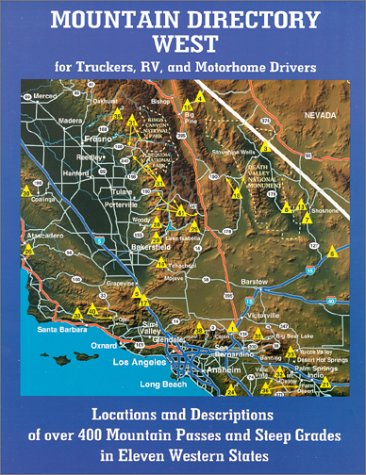 This book provides the locations and descriptions of over 400 mountain passes and steep grades in 11 western states. This information is vital to anyone driving a large or heavy vehicle. There are 12 full color relief maps showing mountain ranges, valleys, cities, highways, etc. Text details include how long and how steep (%) the grades are, whether the road is two, three, or four lane, if there are sharp curves, switchbacks, escape ramps, narrow shoulders, etc. Many mountain grades are hazardous to large or heavy vehicles and knowing what lies ahead can be life saving. Grades can be too long and steep to climb and descend safely. If you've ever had the terrifying experience of losing your brakes while descending a mountain, you know it is not something you want to repeat. Remember the old phrase, "You can go down a mountain a thousand times too slowly, but only once too fast." Some roads are so narrow and winding that large vehicles can't stay in their own lane on the curves. This is hazardous for everyone on the road and in most cases, can be avoided by choosing a safer route. There is a companion book, "Mountain Directory East" that includes the locations and descriptions of over 300 mountain passes and steep grades in 11 eastern states. There are many more hazardous grades in the east than many people realize. While 6 and 7% grades are common in the west, 9 and 10% grades are common in the east and the roads tend to be more narrow and winding in the east due to age and terrain. Many escape ramps are completely inadequate. These books are extremely valuable references for anyone driving a large or heavy vehicle for work or pleasure.

Author Richard Miller was inspired to write this book after a nearly disastrous mountain descent in an 18 wheeler. This occurred in Arizona, but when he subsequently attempted to find information about the mountain grades in various western states, he was amazed to learn that no one had compiled much data about these potentially deadly hills. The only way to get accurate information was to personally drive over as many of these passes and steep grades as he could find. The search eventually covered almost 40,000 miles and yielded detailed descriptions of over 400 locations in eleven western states.

A similar search was conducted in eleven eastern states, this time covering nearly 20,000 miles and yielding descriptions of over 300 passes and steep grades in the mountainous areas of the eastern United States. This information is in a companion book, "Mountain Directory East for Truckers, RV, and Motorhome Drivers."

"..many motorhomers will find one or both of these books useful in taking the surprises out of drivng..." -- Sherry McBride, Senior Managing Editor, "Motorhome" magazine (Sept. 1999)

"It's invaluable info for rookie drivers or old hands traveling into a mountainous area for the first time." -- Andrew Ryder, Editor, "Heavy Duty Trucking" (May 1998)