Items related to Assault of Justice: The Richard Rossi Mystery 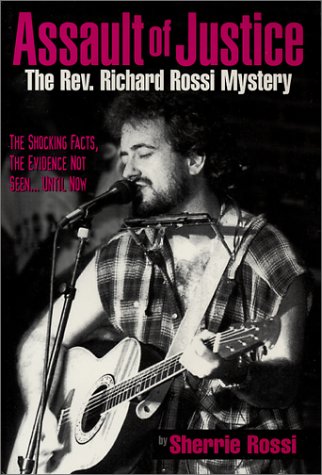 Richard Rossi courageously confronted and exposed a web of police brutality, corrupt politicians, crime, and a Satanic cult on his gritty and critically acclaimed radio talk-show. He was the voice of the powerless who could not speak for themselves. In 1994, the bad guys struck back in a violent attack on his family, an outrageous personal smear job to defame Rossi and silence his brilliant prophetic voice. Richard's loving wife Sherrie overcame the wickedness in high places by further exposing the assault of justice in this best-selling book. Learn how they overcame and how their faith and family became stronger. The Rossi's shared their story on several national TV programs including A Current Affair, Hard Copy, and American Journal.

Book Description Eternal Grace]. Paperback. Condition: Fair. A readable copy. All pages are intact, and the cover is intact. Pages can include considerable notes-in pen or highlighter-but the notes cannot obscure the text. At ThriftBooks, our motto is: Read More, Spend Less. Seller Inventory # G0965233006I5N00