Items related to Blood Lines of the Illuminati 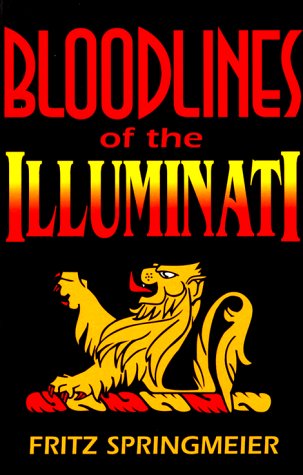 The latest edition of Bloodlines of the Illuminati... Direct from the Distrubutor *************************** You've seen pieces of the puzzle, but still you wonder... Bloodlines of the Illuminati is a unique historical genealogical who's-doing-it book, rich in detail, providing a devastating exposé of the people and families who are THE movers and shakers of the United States and the entire world. You will recognize some of the names instantly. Many names have been purposely hidden from mainstream view. From international finance to war, presidents and dictators alike pay heed to these people. "Influence" doesn't even come close to describing their power. They have plans for you. Who are they? Author, Fritz Springmeier provides a wealth of material and inside information based on eyewitnesses. His outstanding research provides facts that are not available elsewhere. When you finish reading this book, the pieces of the puzzle will fall into place and you'll see the fascinating big p

Fritz A. Springmeier was born in Garden City, Kansas. Both sides of his family were farmers for many generations. Seeking solutions to the destruction of the American family farmer, his grandparents and other relatives joined the American Agricultural Movement in the '70's. In seeking solutions, the Ag Movement discovered pieces of the puzzle that helped lay a foundation for Fritz to discover more about the power at the top of the pyramid of control. His father's career was to help third world nations develop their agricultural abilities. As a result, one of the highlights of his youth included living overseas. In 1973, Senator Bob Dole appointed Fritz to West Point, USMA. Fritz resigned after his second year and was honorably discharged. After West Point, Fritz got several two year degrees and attended Rosedale Bible Institute. Fritz has been in Christian ministry since 1983. He was a part-time missionary for Witness, Inc. from 1983 to 1992. Fritz' rich and diverse background has made him an interesting guest, appearing on radio talk shows around the country and lecturing in the United States, Canada and Japan. Fritz has written numerous other books, some of which are now out of print. His ability to communicate complex subjects in a clear organized manner has endeared him to audiences and readers.

Bloodlines of the Illuminati

Book Description Condition: Good. 3. Good+; Softcover; Covers are still glossy with minor scuffing around the corners; Very minor soiling to the right textblock edge, otherwise unblemished textblock edges; Tiny crease to the bottom-right edge-corner of the text pages, otherwise the endpapers and all text pages are clean and unmarked; The binding is excellent with a straight spine; This book will be shipped in a sturdy cardboard box with foam padding; Medium-Large Format (Quatro, 9.75" - 10.75" tall); Black covers with title in red and orange lettering; 3rd Edition; 1998, Spring Arbor Distributors; 598 pages; "Blood Lines of the Illuminati," by Fritz Springmeier. Seller Inventory # SKU-001AB03210091

Book Description Condition: Good. A+ Customer service! Satisfaction Guaranteed! Book is in Used-Good condition. Pages and cover are clean and intact. Used items may not include supplementary materials such as CDs or access codes. May show signs of minor shelf wear and contain limited notes and highlighting. Seller Inventory # 0966353323-2-4

Book Description Condition: Fair. Independent family-run bookstore for over 50 years! Buy with confidence! Book is in acceptable condition with wear to the pages, binding, and some marks within. Seller Inventory # bk0966353323xvz189zvxacp