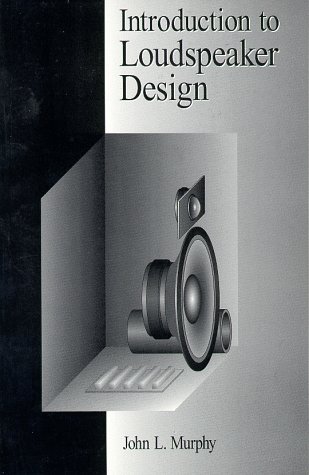 The first edition is now out of print. The 2nd edition of the book is now available in paperback and eBook editions. See ISBN 978-0966377347. Introduction to Loudspeaker Design is written for hobbyists, technicians, and engineers seeking an introductory overview of the technology of loudspeakers. Starting with a brief history of audio developments the book begins by introducing the concepts of frequency, pitch, and loudness and proceeds to develop the idea of a loudspeaker as a system with performance that can be accurately predicted using simulation techniques not unlike those used to design electronic circuits. The work is largely qualitative with an occasional mathematical example. In addition to providing a clear discussion of closed and vented type loudspeaker enclosures the work also covers bandpass enclosures and includes a complete design example for a dipole loudspeaker.

This work was begun in 1989 as part of the user's manual for my loudspeaker design software products. As I began talking with the users of these products I realized how difficult it was to locate introductory information on loudspeaker design. So I proceeded to expand my software manual to teach basic principles of audio and loudspeaker design. The work has now grown to the point where it can serve as an introduction to loudspeaker technology for hobbyists and engineers alike.

The design methods taught here follow the work of Neville Thiele and Dick Small. Ever since loudspeakers were first developed earlier this century to support the budding film industry the engineering analysis of loudspeaker enclosures was less than satisfactory until the publication of Neville Thiele's revolutionary work on loudspeakers in vented boxes in the 1970's. After Thiele's work was expanded and clarified by Dick Small the Thiele-Small Model for loudspeaker systems analysis finally emerged as a useful engineering design tool.

With the Thiele-Small method, the acoustic analysis of a loudspeaker enclosure was transformed and moved from the mysterious world of acoustics to the well-developed domain of electrical circuit analysis. Now, for the first time, we could create electrical circuit models that could predict the acoustic performance that would result when a given driver was mounted in a known enclosure. The implementation of Thiele-Small analysis on mainframe computers and hand-held calculators in the 1970's marked the beginning of the practice of loudspeaker design via simulation.

Today most loudspeaker design tasks are performed with the aid of a personal computer using a loudspeaker simulator such as my WinSpeakerz or MacSpeakerz applications. Therefore it should not come as a surprise that much of the discussion here will center on computer aided design methods.

The author is a physicist with over 20 years experience in the research and development of audio products ranging from 24 channel recording consoles to the miniature electronics found in electric guitars and bass instruments. In addition to his many tube and solid-state electronics products he has also designed loudspeakers for the Pro Audio, Hi-Fi, Musical Instrument, and Auto Sound industries.

Captain Murphy served as a space systems software analyst for the US Air Force during his military career. More recently he has returned to software development to write applications for loudspeaker simulation. His WinSpeakerz and MacSpeakerz applications are now used widely throughout the audio industry as a tool for evaluating loudspeakers before they are built.