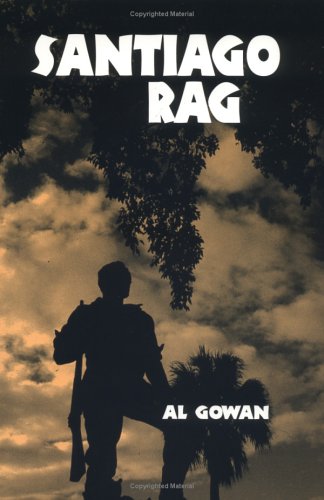 Al Gowan was born in East St. Louis, Illinois. He has lived in Cambridge, Massachusetts since 1970, where he began writing poetry, short stories and finally, novels. His poems have appeared in Midlands, Fan Magazine and on an electronic billboard in Harvard Square. Short stories have been published in Ploughshares, Tennessee Quarterly, the Painted Hills Review and Quixote Quarterly. In 1996, Zamora's Tattoo, his first novel, was published by on-line publisher Bibliobytes. Editors and critics have described his writing as very visual. This should not be surprising since Al Gowan has been a practitioner and teacher of graphic design for over four decades.

A young musician and his cellmate, son of a Sioux chief, join Roosevelt's Rough riders. But in the Cuban jungle, they find enemies even more deadly that the Spanish.

"A magnificent novel, the product of painstaking historical research. Al Gowan has constructed his story of the Spanish-Cuban-American War so that the personality and actions of each character pulls us along to the surprising outcome.
The exuberant Theodore Roosevelt is impeccably rendered. But more important, Gowan brings to light the valor, pride and patriotism of the Cuban mambi." -Jose A. Adan, Academia de la Historia de Cuba E-

"I could hardly put SANTIAGO RAG down. This must-read novel will lead to an understanding of America's emergence as a world power in a way that a hundred histories have failed to do. Gowan hides neither the blemishes not the bravery of his characters. SANTIAGO RAG is quite an achievement." -- Larry Daley, great grandson of Cuban General Calixto Garcia

1. Santiago Rag : A Novel of the Spanish-Cuban-American War

Book Description Access Press. Paperback. Condition: Very Good. A copy that has been read, but remains in excellent condition. Pages are intact and are not marred by notes or highlighting, but may contain a neat previous owner name. The spine remains undamaged. At ThriftBooks, our motto is: Read More, Spend Less. Seller Inventory # G0966389409I4N00

Book Description Access Pr, 1998. Condition: Good. A+ Customer service! Satisfaction Guaranteed! Book is in Used-Good condition. Pages and cover are clean and intact. Used items may not include supplementary materials such as CDs or access codes. May show signs of minor shelf wear and contain limited notes and highlighting. Seller Inventory # 0966389409-2-4

5. Santiago Rag: A Novel of the Spanish-Cuban-American War (SIGNED)

6. Santiago Rag: A Novel of the Spanish-Cuban-American War

Book Description Access Press, Cambridge, Massachusetts, U.S.A., 1998. Trade Paperback. Condition: Very Good. First Printing. 320 Pages. June 1998 Edition. Interior text is flawless. Six-line inscription by author dated March 4, 1999. The characters, polaces and events in this work of ficiton are based on the written accounts of the participants themselves. A young musician and this cellmate, son of a Sioux chief, join Roosevelt's Rough Riders. But in the Cuban Jungle they find enemies even more deadly than the Spanish. Size: 6" X 9". Signed by Author. Seller Inventory # 14181

7. Santiago Rag: A Novel of the Spanish-Cuban-American War