Items related to How Do Witches Fly?: A Practical Approach to Nocturnal...

Kuklin, Alexander How Do Witches Fly?: A Practical Approach to Nocturnal Flights

How Do Witches Fly?: A Practical Approach to Nocturnal Flights 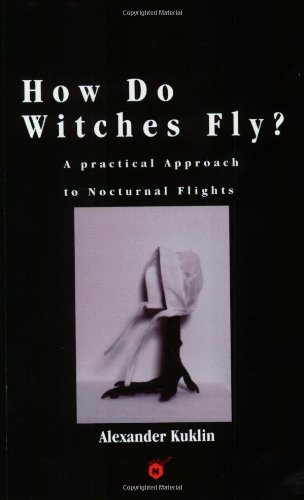 Books which examine the folklore of Europe's traditional "witch" plants are not uncommon, and some give some coverage to describing the psychotropic and hallucinogenic effects of these plants on the human body. However this book is rather more unusual than that in that the author is first and foremost a biochemist with an extensive and intimate knowledge of the alkaloids, or poisonous constituents, for which the plants most commonly listed as being those of flying ointments are rightly famous. Although there is much folkloric material here there is a great quantity of scientific material concerning the physiological effects of the plants and their constituents which is otherwise not easily available to the average reader. Of particular interest, though they may prove distressing for some readers, are the accounts of experiments conducted on bitches to determine the ability of the alkaloids to be absorbed into the body through the vaginal membranes, as well as details of the ways in which the various constituents react against one another to produce sometimes surprising results. For example, one might have imagined that using both aconite (aconitine) and belladonna (atropine) together would have produced a doubly toxic effect on the user, but not so: the two alkaloids have antagonistic (or opposing) toxic effects upon each other, each neutralizing the most toxic effects of the other while leaving the hallucinogenic effects of both largely intact. This is, in short, a fascinating book for those interested in what these plants actually do (rather than what we think they ought to do) to the user.

1. How Do Witches Fly?: A Practical Approach to Nocturnal Flights

Book Description Access Publishers Network, 2000. Paperback. Condition: Good. Good condition is defined as: a copy that has been read but remains in clean condition. All of the pages are intact and the cover is intact and the spine may show signs of wear. The book may have minor markings which are not specifically mentioned. Most items will be dispatched the same or the next working day. Seller Inventory # wbb0013321847

Shipping: US$ 10.18
From United Kingdom to U.S.A.
Destination, rates & speeds