Items related to Of Plymouth Plantation 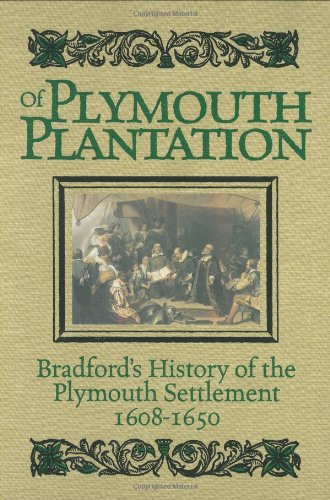 Few people realize that America was founded because a devout band of non-conformist Christians lived and breathed the covenant promises of Jesus Christ. Though the Pilgrims left England because of religious persecution, they actually left Holland to protect their children from ungodly influences. These parents risked everything to protect their young. Bradford boldly proclaimed that these families were willing to sacrifice their lives, if necessary, "even though they [the Pilgrims] be but stepping stones" for future generations of Christians they would never meet. Of Plymouth Plantation is one of the five most inspirational books I have ever read. It is the true story of 50 "average" people who changed the world because they shared a multi-generational vision. For almost two decades, it has been a cherished family tradition to read this book aloud each Thanksgiving. My father, the family patriarch, gathers his many children and grandchildren around the table and reads for several hours the story of Bradford and the heroic Pilgrims. After all, how can we truly appreciate the significance of Thanksgiving if we do not know the real story? My personal library consists of thousands of volumes, but this is one of my most treasured. Your child should not be considered fully educated before reading Of Plymouth Plantation.

“Bradford’s history is a story of a simple people inspired by an ardent faith to a dauntless courage in danger, a resourcefulness in dealing with new problems, an impregnable fortitude in adversity that exalts and heartens one in an age of uncertainty, when courage falters and faith grows dim. It is this story, told by a great human being, that has made the Pilgrim Fathers in a sense the spiritual ancestors of all Americans, all pioneers.” Thus Samuel Eliot Morison, the preeminent American historian in this field, in his Preface to this great American classic.

For the first time the printed text of Bradford’s history has been compared word for word with the original manuscript; for the first time the difficult abbreviations and contractions used by Bradford have been filled out and his archaic and variant spellings made uniform. This edition has a double value: it presents Governor Bradford’s text in readable form and it provides contemporary readers with a history of that text and its enduring significance by the historian clearly elect to interpret it.