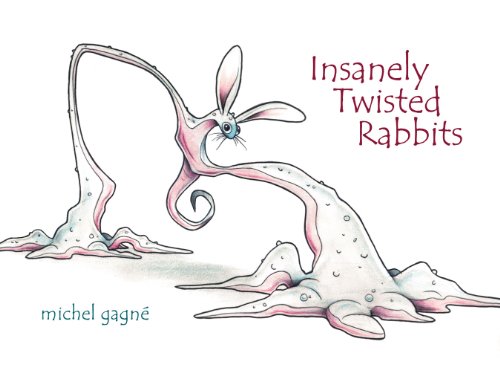 In his fifth book, Michel Gagne launches his imagination at warp speed. This exquisitely rendered collection hovers between the delightful and disturbing, the benign and bizarre. Tender, amusing - Gagne soars to his signature best. Features 43 illustrations, 24 in full color.

Michel Gagne was born in Quebec, Canada. He studied animation at Sheridan College School of Visual Arts in Ontario, Canada and in 1985, began a highly successful artistic career.

Renowned for his unique vision, Michel has lent his talent to several animation companies, such as Don Bluth Studios, Warner Bros., Disney, Pixar, Cartoon Network, Nickelodeon, etc. His creative work can be seen in over twenty feature films including: The Iron Giant, Osmosis Jones, and Ratatouille. His short films, Prelude to Eden and Insanely Twisted Shadow Puppets, are favorites among animation students and teachers, and have played in festivals throughout the world. He was honored by the International Animated Film Society, ASIFA-Hollywood, with four Annie Award nominations. He continues to create animation, special effects and conceptual designs for companies all over the world.

Michel is also very active in the publishing world having written and illustrated a dozen books, as well as two ongoing comic series: ZED and The Saga of Rex. His work has been published by DC Comics, Image Comics, Random House as well as Michel's own imprint, GAGNE International Press.

Among his other creative endeavors, Michel has experimented in a variety of projects in various media including video games, art shows (paintings, sculptures and mixed-media), trading card games, etc.

Simply put, Michel loves what he does!

He lives peacefully with his Family, in the Pacific Northwest, USA.

The story of these strange rabbits began sometime in 1991, while I was working at Don Bluth Animation Studios in Burbank, California. One day, I entered the room of my friend and co-worker Dave Kupczyk, as I often did, and saw a drawing of a rabbit he had done. The drawing was a semi-realistic portrait of his pet rabbit with oversized fangs. Dave smiled and said "That's Fudge, evil fudge!" I went back to my desk and scribbled a picture of an enraged deformed mutated rabbit. I brought the drawing to Dave and said, "Now that's an evil Fudge!"

From this point on I was hooked! Every time I had a minute between assignments and during my breaks, I doodled more deformed rabbits. Dave quickly joined me and the whole thing became a kind of contest of who would draw the most bizarre creature. Dave kept on pinning each new drawing to the walls of his room and eventually his work environment was filled with strange rabbits. The word got around the studio and people frequently came to visit his room to see the latest creations.

We each did fifty rabbits before Don Bluth Studios closed down at the end of 1992. Dave and I parted ways, but somehow the "rabbit project" did not die. I kept my sketches with the idea of one day publishing a weird rabbit sketchbook. Dave on the other end had a more ambitious goal. He started painting each one in full color as well as designing a layout for a high quality coffee table art book. I sincerely hope that Dave gets his version published some day. In the meantime here are my sketches.