Items related to Deliverance from Demons and Diseases: Freedom from...

Deliverance from Demons and Diseases: Freedom from Incurable Diseases and Persistent Problems 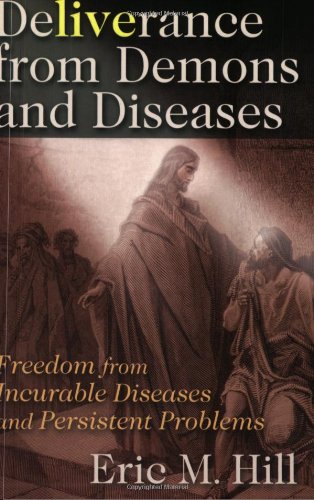 Tormented by persistent problems or incurable diseases? Done all you know to reach God, but nothing happens? Fasting, praying, crying, counseling--nothing works? If so, this book is for you. Eric explains how to seek God for help. He shows from the Bible and personal examples that many problems are directly aggravated or caused by demons--evil spiritual entities ignored or scoffed at by many, but spoken of as literal beings by Jesus Christ and the Bible.

Eric regularly sees many people delivered from sexual, emotional, mental, and spiritual bondages that previously appeared unbreakable. A personal friend of his was dramatically healed of scoliosis right before the eyes of he and his wife and another couple. How? It happened by casting out the spirit--that's right, the spirit--of scoliosis. A preacher who was called to the ministry confessed that he couldn't answer the call because he was totally bound by lust. He was dramatically set free after only five or so minutes of what is commonly known as "deliverance ministry." Another woman was freed from hearing voices. She had heard extremely clear voices in her mind for at least 30 years. They would torment her by incessantly telling her that she was filthy and unworthy of God's love. That is, until the tormenting spirit was cast out. Eric, himself, was delivered from a spirit of pain that had caused years of debilitating migraine headaches.

Nonetheless, it isn't the intent of this book to classify every negative thing that occurs as the work of a demonic spirit. It is, however, its intent to convince you that your situation could be the work of an evil spirit. What would you lose by taking the Bible seriously and at least cautiously examining whether these things are possible?

Do you believe in God? Do you believe He is a spirit? If so, you already believe in a major premise of this book--that spirits are real. Is it unreasonable to believe that if there is a such thing as a good spirit, God, that there could be evil spirits?

Eric Hill is a Christian who fully believes in the delivering and healing power of Jesus Christ. He teaches and preaches the word of God with clarity, boldness, and an expectancy that God backs up His word with miraculous signs following. His anticipation that God will show up in power is rarely disappointed. People are regularly delivered of evil spirits, pains, sicknesses, mental torments, and spiritual problems.

The author is committed to evangelism and the local church. He and his wife, Sonny, perform these services through their organization: Power Evangelism Ministries. They consider invitations to minister irrespective of the size of the ministry.

1. Deliverance from Demons and Diseases: Freedom from Incurable Diseases and Persistent Problems

2. Deliverance from Demons and Diseases: Freedom from Incurable Diseases and Persistent Problems