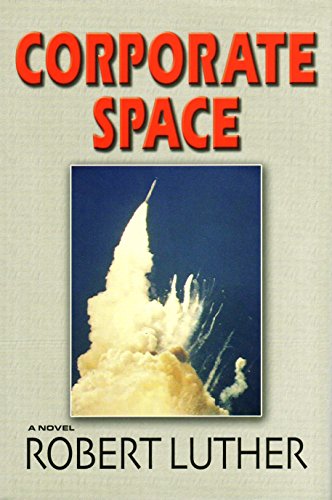 Robert Luther dreamed of going to the moon when he was a young boy. It was a dream that ultimately propelled him to a career as a professional electronics engineer.

Luther spent some 23 years working with NASA as a contractor engineer, beginning with the early Saturn Apollo program and culminating with the Space Shuttle development and launch.

He was intimately involved in the Space Shuttle Program from its inception until he left the program in 1986.

Corporate Space dramatizes the internal politics, corporate struggles, intrigue, romantic trysts and involvements that are part of many companies that are never seen or heard by the public.

It fictionalizes the struggles for power and ego building of unscrupulous managers who would take control of all facts of a company without regard for integrity.

Corporate Space theorizes the engineering efforts, heartbreak and tragedies of a space program gone wrong inside or Space Corp; a company engaged in designing and building Solid Rocket Boosters.

He ran Linotypes, setting type for some of the nation s largest newspapers. He s flown private airplanes all over the country. He helped NASA develop the rocket that put men on the moon. Then he founded and ran his own engineering company before retiring in 2005.

It s been a busy, fulfilling 84 years. He s still at full throttle.

Bob spends most days in his private hangar at the Hazel Green Airport, nestled between Huntsville, Alabama, and the Tennessee state line. Managing the day-to-day operations of the airport isn t a job to Bob. It s just part of his life.

Bob s romance with flight began when he was 6 years old, and his grandfather took him to the Chattanooga Municipal Airport just a grass strip at the time. He started flying 14 years later in 1951. His first flight was in a Piper J3 Cub in Walnut Ridge, Arkansas.

He knows every nook and cranny of an aircraft. As an aircraft mechanic with a Federal Aviation Administration (FAA) Inspection Authorization, he can inspect and approve aircraft for flight and perform annual inspections.

Back when he was in high school in Farragut, Tennessee, Robert joined the U.S. Navy Reserve.

I was immediately activated in the Korean War, he says.

After the war, he remained on active duty a few years as a naval aviation electronics repairman.

I maintained the electronics in carrier fighters from Squadron VF 100, he says. This included the Grumman F6F Hellcat, the Grumman F8F Bearcat and many others.

When the war ended, he had to find a job.

He knew he wanted to get an engineering degree from the University of Tennessee in Knoxville, not far from his hometown. But he wasn t quite ready. So, he went back to his other roots. Bob was reared in the weekly newspaper business, and he bought a weekly newspaper in Pearson, Georgia.

I kept it about a year before I sold it to a fella so I could go work on my degree in electrical engineering.

His plan was to work in the composing room at the Knoxville News-Sentinel. That lead him to many adventures, including a year he spent as a traveling linotype machine operator.

Bob obtained his Professional Engineer license and designed the first instrumentation test on the console for the Saturn V F1 engine. He worked on Saturn V launch systems and Bob led several integral projects as the space program evolved to the space shuttle program. Bob was awarded a NASA commendation of Excellence in Engineering Work.

Bob eventually started an engineering and security management company in 1986 following the Space Shuttle Challenger disaster. He grew Paragon Systems, Inc., from a one-man show to a corporation with more than 1,400 employees.

But that s not all. Bob also had some stories to tell. In 1999, he published his first book, Skybolt, an aviation adventure novel.

In 2005, Bob retired and sold Paragon. He also published his second book, Corporate Space, which theorizes the engineering efforts, heartbreak and tragedies of a space program gone wrong inside of Space Corp, a company engaged in designing and building Solid Rocket Boosters.

Since then, he acquired and has restored a linotype machine at his hangar. He also wrote about his newspaper days in Tramp Printer, published in January 2015.