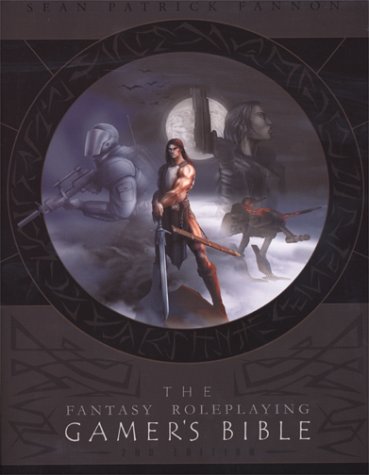 "Everything you ever wanted to know about gaming... but thought you'd be a geek if you asked." Hailed as the best source of information ever created about Roleplaying games, this is the single most important book any gaming fan- or anyone who wants to understand RPGs- could hope to own.

ABOUT THE AUTHOR SEAN PATRICK FANNON

There are very few people more qualified to write about the roleplaying game hobby than Sean, and he's had all of them blackmailed into silence or deported. He entered the hobby with the very first D&D boxed set in 1976 and was never quite right in the head after that. Around 1989, he actually started working professionally in the industry, writing and designing for such games as Champions, Star Wars, Shatterzone, and the FUZION System before going on to spend some "interesting" years in the computer gaming world. Sean also wrote for such magazines as Shadis, Dragon, Adventurer's Club, and InQuest Gamer during these long, torturous years of making his hobby his life.

Sean is now Director of Obsidian Studios, where he pulls Endless Possibilities Out of the Void every day. He lives on the beach in Jacksonville, FL with his beagle, Lady (AKA "The True Face of Evil," AKA "The Notorious Waggle-Butt") and the Alpha Centauran Invasion Force (who he is single-handedly saving us all from by drinking them under the table nightly with pints of Guinness).