Items related to The Narrow Path: Revelations in Advanced Spirituality 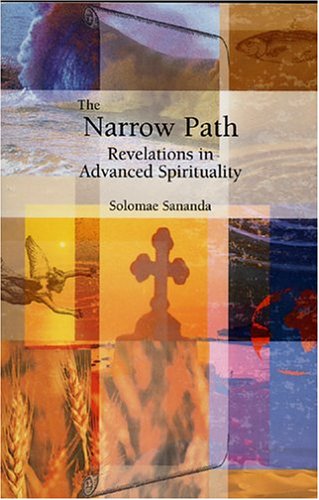 For two-thousand years Christ has waited for mankind to come to a true understanding of His mission, the uniqueness of His gift and the fulfillment of His plan. That time has come...

Drawing upon direct experience of advanced stages of consciousness, Solomae reveals the mysteries of the Christing process. In these pages, Solomae shares the way in which Christ comes into embodiment through humanity. You will have an advanced understanding of the Holy Spirit, the Christ Body, the forces that oppose The Christ and the path that mankind must follow if they are to enter the ‘narrow gate’ and experience true divinity.

This book is for anyone who: Has yearned for a deeper and more advanced understanding of Christ’s message; Has turned away from religion in search of a deeper truth; Has wondered about the differences between the Eastern and Western spiritual paradigms; Is searching for peace, truth and the direct experience of Divine love.

Solomae s a contemporary Christian Mystic, spiritual teacher, author and ordained minister who has experienced both the Eastern and Western spiritual paradigms and now assists others who seek to follow the true path of Christ. She draws upon her experiences of advanced states of consciousness, including the Christing process, to assist others in navigating the perils, pitfalls and complexities of moving into higher spiritual awareness.

The information that is shared in this book has come by way of direct experience. The sharing of these experiences is the means by which mankind will evolve. There are many truths which come to us as we evolve. Our ability to grow, both individually and collectively, depends on our willingness to let go of what we think we knew and understood and be open to the direct revelation which comes through an open mind and open heart. There are those who are not yet ready to receive these truths, but the fact that you are reading this now, indicates that on some level, The Christ has already begun to grow within you, or you would not be led to this information.

For those who have read my previous books, you will note that they have successively represented my growth as it has progressed. This book picks up where my previous book, Kundalini and the Evolution of Consciousness (Living Spirit Press, 2003) left off. This is the next step in human experience, the true meaning of what Christ did and continues to do for us, and the path that those who seek to know Him directly, beyond the confines of religion, must follow.

This is not a Christian book, nor is it a religious one. It is the means by which a new expression of human spirituality can begin to take root in those who have the courage to move beyond the existing ceiling which has kept mankind from moving forward. For those who have followed my teachings over the years, you will find many things within these pages that I have not previously spoken of. So much of what is experienced as one moves into higher levels of consciousness is difficult, if not impossible to explain in human terms. Oftentimes, words cannot describe the experiences which occur on higher planes where communication is received directly through the intuitive body, integrated throughout the subtle bodies and ‘stepped down’ for assimilation into the human consciousness. Making the sharing of higher truths even more difficult is the awareness that whatever is shared, it will be filtered through the mind where it will be judged and compared. In the case of spiritual information, there is even more scrutiny because of the prejudices created by religion and the arrogance of the ego that seeks to be ‘right’. Thus, the challenge is presenting this information in a way that is neutral of man-made religion, while being confined to the usage of accepted terms and descriptions which are understandable to most people.Spirit always provides and as I was preparing to begin this book, I was led to the writings of Rudolph Steiner (1861–1925), a highly developed clairvoyant who founded the Anthroposophy movement and was responsible for the creation of the Waldorf schools. Steiner based his work on direct knowledge and perception of spiritual dimensions which he referred to as ‘spiritual science’. Through his writings, I was able to put words to what I had experienced, yet had never before found written references.In addition to Steiner’s work, this book contains various quotes from the Gospel of the Holy Twelve, an Essene book which closely follows the Gospels of the New Testament. These Essene teachings of Jesus are the clearest and purest available to us in written form. Unlike the traditional Bible, which was altered and changed at its inception, the teachings of the Essenes provide a clearer vehicle through which we can come to directly discover The Christ within ourselves. The Gospel of the Holy Twelve is very revealing for those with an energetic understanding of advanced Christianity and I found it very helpful as I sought out references to the stages experienced by The Christ.It has broken my heart to see how Christianity has turned so many people away from Christ. It has also broken my heart to see the manipulative energies which flow through the world’s religions and new-age spirituality which further obscure the truth and open people to the powers which oppose The Christ. Jesus said it would be so, that His teachings would be changed and hidden from the multitudes. He also promised that the Truth would be revealed and that the darkness would lift.

It is my deepest prayer, and the purpose of my incarnation, to bring to light that which has been hidden and misunderstood, to ‘connect the dots’ between the Eastern and Western paradigms and to reveal the experience of the Christing process for those who are ready to receive this information.

Book Description Living Spirit Press. Paperback. Condition: Good. A copy that has been read, but remains in clean condition. All pages are intact, and the cover is intact. The spine may show signs of wear. Pages can include limited notes and highlighting, and the copy can include previous owner inscriptions. At ThriftBooks, our motto is: Read More, Spend Less. Seller Inventory # G0967785286I3N00

Book Description Living Spirit Press, 2004. Condition: Good. A+ Customer service! Satisfaction Guaranteed! Book is in Used-Good condition. Pages and cover are clean and intact. Used items may not include supplementary materials such as CDs or access codes. May show signs of minor shelf wear and contain limited notes and highlighting. Seller Inventory # 0967785286-2-4