Items related to Revelation Has Begun 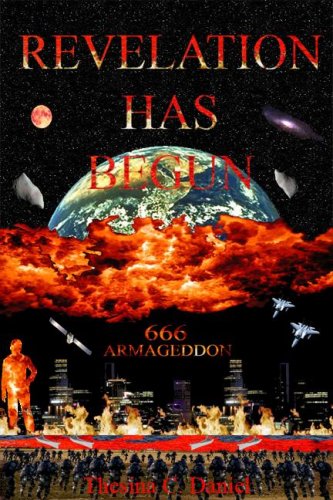 This is how I came to write and title this book Revelation Has Begun. On January 6, 2006, I had a dream that the prophesies of the Book of Revelation has begun to be fulfilled. In my dream, I saw a pack of dogs approaching me as I stood in the doorway of a building. They did not seem to be evil, but they looked liked they had traveled from a long journey; they looked tired, skinny, and dirty, and were in need of a bath and food to eat. As they got closer to me, they stopped. In the midst of them, a dog rose up that resembled the others, but was the purest white dog I had ever seen, and appeared to have been carried all the way. The pure white dog came and stood right in front of me, then looked up at me, while the others stood to the right side of me about a foot or two back in a bowing position. I looked down at the dog that stood before me and it had four eyes-two regular eyes and another two, above the first set. I looked down at the dog and could not believe what I was seeing. Immediately I heard a powerful voice in my dream said, Revelation has begun . I woke up shaken by the dream; it was 3AM. Before I fell back to sleep, I said, Lord if Revelation has truly begun, I want to dream the same dream again as proof and confirmation from you that the prophesies of the Book of Revelation has begun to be fulfilled, then after this confirmation, I will begin to decode the Book of Revelation. After I fell back to sleep, I had the identical dream over again from start to finish. This book is a book of facts, not fiction that tells a story about the coming tribulation, but a book that will bring to light the meaning of the Book of Revelation. It was decoded verse by verse. It has twenty two chapters and a final write up on, What must I do to be saved . For example, if you are reading Revelation chapter thirteen in the Bible, you will open the book to chapter thirteen to read the full meaning verse by verse. This book was not written based on what I believe the scriptures meant or from a particular doctrine or church affiliation but it was decoded from the Original King James Version. You will also discover why 9/11 happened and understand in full President Bush mission when he came into office in 2000. Is the antichrist living among us with the prophesies of the Book of Revelation beginning? This book, Revelation Has Begun will not leave you guessing, you will have proven facts. Throughout the book project I had many dreams and visions like the Apostle John which also helped me decode the book of Revelation and wrote them in the book. Early in 2007, scientists predicted and are 99.7 percent certain that a huge asteroid will impact the earth in 2029 with the energy of 65,000 Hiroshima bombs. Large glaciers will shrink, about 70 percent of the world's plants and many animals and vegetations will become extinct, there will be a shortage of food which will create conflicts between nations, supplies will be few and demand will be great, a large percent of the world s coral reefs will be lost, the Arctic Sea will melt, there will be drier conditions and longer droughts and water shortages, millions will die and the days will be shorter. AOL News .

Thesina C. Daniel began writing poems at the age of twelve and as she grew older began to write nonfiction books that help, motivate and inspire. Her greatest accomplishment as a writer is to get letters from her readers on how her books have made a difference in their lives. Daniel has been a Christian all her life and she puts God in the middle of all her books and still the books are a page turner. She has authored five books, and her newest book Revelation Has Begun was written after it was revealed to Daniel in a dream on January 6, 2006 that the prophesies of the Book of Revelation has begun to be fulfilled. After having this dream God revealed to her the meaning of the prophesies from the Original King James Version verse by verse. Her book, God s Chosen Fast, reveals a different type of fasting that help one understand living a true Christian life. Three of Daniel books, 'How To Succeed through Your Teenage Years- and avoid yielding to drugs, teenage pregnancy, suicide and serving time in jail', `The Family The Home And The Community preparing the next generation to succeed and Reaching Adulthood Prepared' was written for all parents, children, teens and college students. The easy to follow, step by step guide in these books, will help all to succeed. One of Daniel books 'How To Succeed through Your Teenage Years' is currently being used at several public schools in Florida as a must read for the students. Daniel has made several appearances and as a speaker at many public schools. Daniel strongly believes, the children are our future generation of performing citizens, and we need to do all we can to help them stay focus to succeed. Being a parent in today s generation is not always easy trying to balance the daily responsibilities, a job and finding time to raise children who will succeed. Too many of our teens are in jail, detention/juvenile centers, are teenage parents, committing suicide, strung-out on drugs or die from drug overdose. Children can t raise themselves and the book, The Family The Home And The Community was written as a self taught guide for parents showing them how to balance the family, job and their household responsibilities. Reaching Adulthood Prepared, is a self taught guide written for children from elementary to college graduation, showing what they need to do from an early age or at any age to reach adulthood prepared even if there are no parents guidance in the home. There is no doubt our future will not be brighter. The successful strategy Daniel has written in her books has helped many children, teens and parents.