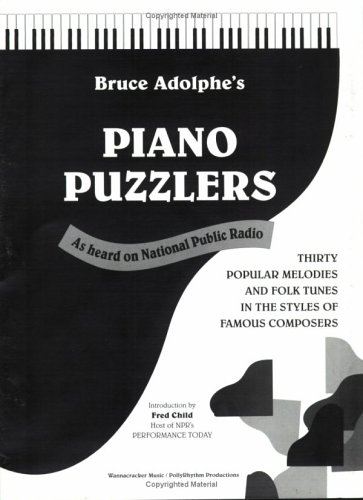 On public radio stations throughout the country, Bruce Adolphe plays popular melodies disguised as pieces by great Classical composers--and contestants call in to guess the tune and the composer whose style Bruce is imitating. If you play the piano, teach music, or are a Classical music lover, this book is for you. Here are 30 of Bruce's "recompositions", printed exactly as he performs them on the radio. Now you can play them at parties, in the classroom, as encores, or just to drive your neighbors crazy! With an introduction by Fred Child, host of NPR's Performance Today.

BRUCE ADOLPHE Whether it’s about a fugitive turkey, a mysterious message from the moon, or a teenage T. rex, Bruce Adolphe’s music captures the hearts and minds of audiences of all ages. Bruce has composed music for Itzhak Perlman, The Chamber Music Society of Lincoln Center, the National Symphony, the Orpheus Chamber Orchestra, the Beaux Arts Trio, Sylvia McNair, the Brentano Quartet, and many other renowned musicians and organizations. A composer, author, actor, pianist and scriptwriter, Bruce has earned a national reputation as a leading figure in the field of music education and audience development. Renowned for combining comedy and musical scholarship, he has been the lecturer of The Chamber Music Society of Lincoln Center since 1992 and a featured speaker at New York’s Metropolitan Museum of Art since 2001, as well as a frequent guest lecturer at many of the country’s premier concert series and festivals, music schools and education conferences. A prolific author, Bruce has written three books on the art of listening to music: The Mind’s Ear: Exercises for Improving the Musical Imagination; What to Listen for in the World; and Of Mozart, Parrots and Cherry Blossoms in the Wind: A Composer Explores Mysteries of the Musical Mind. He has appeared on nationally televised Live from Lincoln Center broadcasts, and is often a guest on National Public Radio. Bruce’s latest radio venture is a comic musical quiz show featuring his renditions of familiar tunes in the styles of famous composers for NPR.