Items related to The Parent as Coach Approach Audio CD 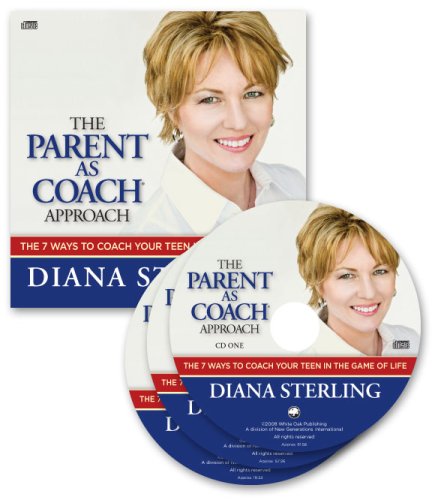 Under two hours of the actual book, as read by the author, Diana Sterling. Listen to it on CD in your car, or put it on your iPod and listen anywhere! Experience Diana, Family Coach for the New Generation, coaching YOU using The Parent as Coach Approach.

Diana Sterling, Author of The Parent as Coach Approach: The Seven Ways to Coach Your Teen in the Game of Life first launched this important work under the title Parent as Coach: Helping Your Teen Build a Life of Confidence, Courage and Compassion, (under Diana Haskins). It received international acclaim and is distributed throughout North America, Latin America, Korea, Europe and Australia and is translated into Spanish and Korean. The new revised book now includes 50 success stories from all over the world from happy families, using The Parent as Coach Approach. The main content remains unchanged and has proven to work effectively. Diana is a Body for Life 2002 Winner in Bill Phillips Body for Life worldwide competition and is featured in Body for Life for Women. She is also featured in Wake Up; The Power of Team along with Tony Robbins and Wayne Dyer. Author Diana Sterling (formerly Diana Haskins) is a 30 year entrepreneur and innovator. Her commitment to helping others find meaning and success has resulted in the creation of New Generations International, Inc., a personal and professional development company serving families, teens and individuals worldwide. As CEO of New Generations International, Diana oversees three divisions. Her business educational program, Vision in Action is a testimony for her relentless enthusiasm for self-employment. The second division, Parent as Coach, is a series of programs designed to support parents going through the struggling teen years of parenting. Diana and her son Jordan, now 25, found that the skills and systems of coaching allowed them both to migrate successfully through his often difficult teen years and her even more difficult parent of teen years. Academy for Family Coach Training is the third division and compliments the other two by offering the world acclaimed Advanced Coaching Course, which trains professionals in the art of professional coaching in the specialty of teens and parents. In addition to her leadership role, Diana is an executive coach, lecturer, trainer and facilitator in the areas of Small Business Development, Parenting, Life Skills, and Professional Coaching. She has a wealth of knowledge and communicative skills acquired through her background in coaching, teaching, drama, music, and film production. Diana holds a Bachelor Degree in Drama and is working towards a Masters Degree in Education majoring in Adult Learning and Development at Portland State University. She has completed a Professional Certificate in Coaching at New Ventures West and holds the distinction of being a Neuro-Linguistic Programming Practitioner, certified by Life Design International. She is a member of the International Coach Federation and International Speakers Association. Diana is known for her innovative and creative style of speaking, coaching and training having achieved excellent results with a diverse base of individual clients, including corporate executives, small business owners, service professionals, professional coaches, parents and teenagers. Prior to founding New Generations International, Diana served as Executive Producer of The Production Team, Inc, which she founded in 1993. She is an award winning film and video producer with over fifteen years as a freelance producer. She produced and directed a thirty-minute documentary, Guerilla Theatre for Outside In, a non-profit agency working with homeless youth, earning her a First Place Telly Award, which took her into deep into the world of homeless youth. Diana is married to a caring, insightful man of God, Bill Sterling, adding to her growth on a daily basis. And the true inspiration for her dedication comes from her positive relationship with her grown son, Jordan, who says on a regular basis, Go for it, Mom!