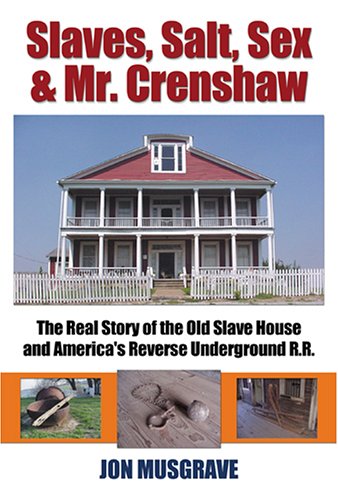 The Old Slave House has stood for some 166 years a few miles east of the village of Equality, Illinois. An antebellum plantation manor, it's long held the history of nefarious activities in its attic, stories of kidnappings and victims held against their will. It's been recognized for its ghosts — some say it's one of the most haunted places in America. It's been recognized for its architecture. That's why it's on the National Register of Historic Places and in September 2004, the National Park Service recognized it for its history as a station on the Reverse Underground Railroad by naming it to its National Underground Railroad Network to Freedom program. Slaves, Salt, Sex & Mr. Crenshaw is the result of eight years of research into the real history behind the stories long told to visitors, from the kidnappings and slave breeding to the visit of Abraham Lincoln and the potent political connections, both real and those just claimed, held by the owner John Hart Crenshaw and his family.

A historian active in the effort to preserve the Old Slave House, Jon Musgrave joined with fellow area historians Ron Nelson and Gary DeNeal in the fall of 1996 to research the real history of this much misunderstood historic site. Musgrave's efforts continued for eight years and cumulated with Slaves, Salt, Sex & Mr. Crenshaw. Unknown when he started researching the site, nine months into the research he discovered his own family relationship to the original owner of this antebellum kidnapping station. When not researching and writing about Southern Illinois' history, Musgrave teaches at Shawnee Community College in Ullin and sells real estate in Marion.

Book Description IllinoisHistory.com, 2004. Paperback. Condition: GOOD. Has little wear to the cover and pages. Contains some markings such as highlighting and writing. Seller Inventory # 0970798458_abe_gd

Book Description IllinoisHistory.com, 2004. Paperback. Condition: VERY GOOD. Pages are intact and are not marred by notes or highlighting, but may contain a neat previous owner name. The spine remains undamaged. Seller Inventory # 0970798458_abe_vg

Book Description IllinoisHistory.com. Paperback. Condition: Good. Item is in good condition. Some moderate creases and wear. This item may not come with CDs or additional parts including access codes for textbooks. Might be an ex-library copy and contain writing/highlighting. Seller Inventory # DS-0970798458-3