Brown, Mary M On the Glory Road with God and his Angels

On the Glory Road with God and his Angels 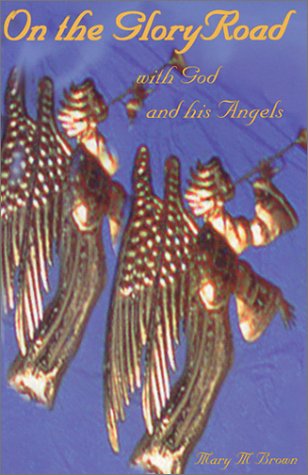 What a blessing it is for me to share with you the wonderful manifestations of God in the form of angels, the angels in scripture, and God revealing exciting visions of what is in the mind of God

When God first instructed me to write this book, I was a procrastinator giving all sorts of excuses. I delayed and delayed doing so, until I really had myself in some hot water with God. He was making me very uncomfortable on the job, so I retired early from work; so that I could fulfill what He had called me to do. But before I did, I began to question God about me as a writer.

I said “God, who am I to write such a book?” and He said, You’re my child and I have told you to write it that should be all you need. But He said, “If you really need more, you have seen more angels than anyone on earth. Don’t you think you should tell what you have seen and heard?” He continued, “You know there is an angel craze; some people are talking about angels all the time, even worshipping them. Angels are here to minister for them, not to be worshipped. You can set the record straight.

The author is a Minister. She broadcast over 35 radio stations every Sunday. She worked in the Prison system in Kentucky. Sometimes being alone with 100 prisoners. She had also worked closely with the Governor’s staff. This is the First of many books that she will write.

Rebecca Reads Review When Mary Margaret Brown was approximately nine years old, she lost her Grandmother Brown, to whom she was very close. Her grandmother had helped fuel Mary Margaret's spirituality...Once her grandmother passed, she was left with a feeling of emptiness inside. She immersed herself in reading everything that she could get her hands on about the Lord. As she was walking home from school one day she had her first vision of the Lord. "He appeared to be a spirit and was about 15 to 18 inches off the ground. It seemed that I could see through Him...What was so striking about Him were His blue green eyes in His olive skin. They were pools of liquid love and compassion." In this and subsequent meetings with the Lord, Mary Margaret learns that she is to be an instrumental part in communicating the word of God; in fact she claims that God specifically instructed her to write this book....(pg2) He also tells her that she seen more angels than anyone else in the world and encourages her to share her experiences. Brown's book is definitely interesting and attention grabbing. Her story is very unique and I have never read anything like it before....Mary Margaret Brown is a very spiritual person and besides this book she shares the Word of God as a minister and as the president of Standing in the Gap Ministry. I recommend this book to anyone who wants to read an autobiographical account of one woman's spiritual journey and to those interested in the subject of angels and their purpose.

1. On the Glory Road with God and his Angels

Book Description Gold Star Publishing. Paperback. Condition: Very Good. A copy that has been read, but remains in excellent condition. Pages are intact and are not marred by notes or highlighting, but may contain a neat previous owner name. The spine remains undamaged. At ThriftBooks, our motto is: Read More, Spend Less. Seller Inventory # G0970855702I4N00

2. On the Glory Road with God and his Angels

Book Description Gold Star Publishing, 2001. Condition: Good. A+ Customer service! Satisfaction Guaranteed! Book is in Used-Good condition. Pages and cover are clean and intact. Used items may not include supplementary materials such as CDs or access codes. May show signs of minor shelf wear and contain limited notes and highlighting. Seller Inventory # 0970855702-2-4