Items related to Minnie the Mule and the Erie Canal

Lettie A. Petrie Minnie the Mule and the Erie Canal

Minnie the Mule and the Erie Canal 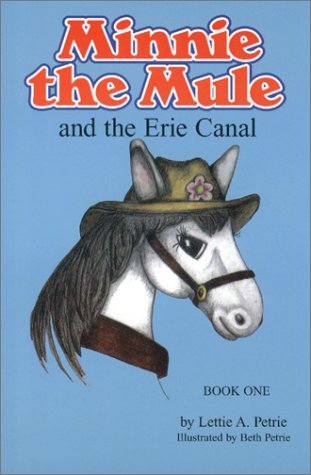 Formatted for children in grades four through eight, this first in a series of historical adventure stories, is told through the eyes of Sarah, Captain John's thirteen-year-old daughter, and Minnie the Mule, one of the mules who towed Captain John Fairweather's barge on the Erie Canal. The story takes place in the middle of the nineteenth century when the Erie Canal teemed with activity twenty-five years after its opening in Rome, NY in 1825, and introduces young readers to the locks along the canal and the lives of "canawlers" those hardy folk who traveled from New York City's busy harbor, up the Hudson River to Albany and into the Erie Canal, going west to Buffalo, where the canal emptied into the Niagara River and Lake Erie, "the way west". Leaving Rome that spring to deliver freight to New York City the Fairweathers seem to be followed by a series of bank robberies along the canal. Read how Sarah and Minnie come to suspect that their "hogee" the man who walks the mules, is connected with the robberies, and how they catch him. Along the way readers will learn a little about the lock system of the canal, and some of their country's history in its colonial days.

Lettie Petrie has lived in central New York for most of her life, and most recently retired as director of Camden's Public Library, where she loved the story hours she held for children. She told them stories of the Adirondack's animals that she wrote for her own children, and a collection of some them, "Adirondack Fairy Tales" was published by North Country Books in 1997. Now a reporter and feature story writer for "Queen Central News" published in Camden, NY, she has finished two of this new series. The second, "A Baker's Dozen, a story of colonial Rome, NY is scheduled to be published soon.

"The stories of chipmunk Bob, Marshmallow bear and Buffy rabbit live long after the animals that inspired them. -- Post Star -September, 1997

"These wonderful stories of Bob chipmunk, Marshmallow bear, and other animal visitors to their campsite are charming and alive." --Rome Sentinel September 1997

1. Minnie the Mule and the Erie Canal

2. Minnie the Mule and the Erie Canal [Paperback] Lettie A. Petrie and Beth Petrie