Items related to The Journey of a Lifetime

Booker, Larry L. The Journey of a Lifetime

The Journey of a Lifetime 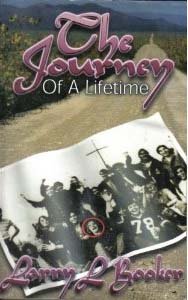 This is a biography of an ex-hippie and how God turned his life around. It has a combination of humor and pathos. It makes a very interesting read.

Noted evangelist, pastor, Bible teacher and conference speaker, Larry L. Booker came to God in 1972 in Bartlesville, Oklahoma. Though a former slave to drugs and alcohol, he went on to become assistant pastor to Rev. Roy L. Moss. In 1977 he, his wife Brenda, and their infant son Joel left to travel and preach the gospel as a full-time evangelist.

In 1976, he became pastor of the First United Pentecostal Church in Miami, Oklahoma, where he remained for four years. Returning to the evangelistic field in 1981, his family, with two more sons Phillip and Larry Andrew, spent the majority of the next 3 years in California.

In 1984 he became pastor of Gospel Lighthouse Church of Arroyo Grande, California where he served for the next 12 years. During those years the congregation grew and new facilities were added, including a five-story lighthouse office structure, the only one of its kind in the United States.

He is currently Pastor of Inland Lighthouse Church in Rialto, California. Since assuming the pastorate in 1976 the church has grown steadily from under fifty into the hundreds. Pastor Booker has now turned his capable hand to the written word, including the story of his life and deliverance from drugs.

1. The Journey of a Lifetime Booker, Larry L.