Items related to Void where prohibited revisited: The trickle-down effect... 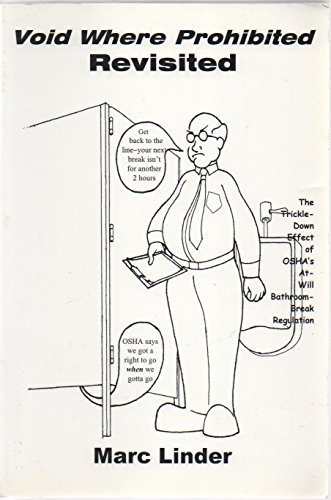 Even before it appeared at the end of 1997, "Void Where Prohibited: Rest Breaks and the Right to Urinate on Company Time" had mobilized public opinion to pressure the Occupational Safety and Health Administration to abandon its preposterous position that its industrial sanitation standard, which requires employers to provide toilets, did not obligate them to let workers use those toilets. On April 6, 1998, OSHA finally issued a Memorandum declaring that the "standard requires employers to make toilet facilities available so that employees can use them when they need to do so." Thus with a few keystrokes, OSHA had created a right for tens of millions of workers to stop work when they need to void. Or had it? Was this establishment of at-will bathroom breaks worth the cyberspace it was posted in? How do labor-protective regulations get enforced in a world of: powerful employers opposed to government interference with their control of employees' time; workers - 90 percent of whom in the private-sector are nonunion - afraid to assert their rights or file a complaint; and an understaffed OSHA that fails to pursue complaints vigorously (or, in the unique case of California OSHA, refuses even to comply with its obligation to insure that its standard and interpretation are "'at least as effective' as the Federal standard")? Five years on, Void Where Prohibited Revisited: The Trickle-Down Effect of OSHA's At-Will Bathroom-Break Regulation answers these questions by analyzing all the citations that OSHA has issued to employers for violating their obligation to let workers go to the bathroom and by inter-viewing OSHA officials, labor union officers, workers, and employers.

Book Description FaĚ npiĚ huaĚ Press, 2003. Condition: Good. A+ Customer service! Satisfaction Guaranteed! Book is in Used-Good condition. Pages and cover are clean and intact. Used items may not include supplementary materials such as CDs or access codes. May show signs of minor shelf wear and contain limited notes and highlighting. Seller Inventory # 0971959404-2-4

Book Description FaĂ ?npiĂ ?huaĂ ? Press, 2003. Paperback. Condition: Good. Good solid copy, mild to moderate reading/age wear, no DJ if issued, may have some light markings or exowner inscription. We take great pride in accurately describing the condition of our books and media, ship within 48 hours, and offer a 100% money back guarantee. Seller Inventory # mon0000133072