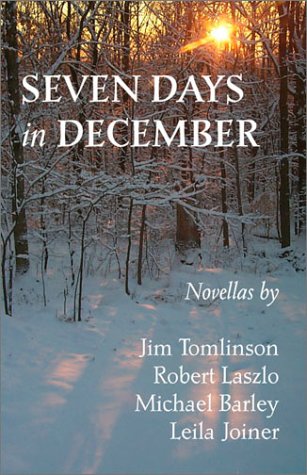 Four novellas based on a common theme. In Tomlinson's "Prologue," two young strangers spend a week in Washington in the aftermath of John Kennedy's assassination. In Laszlo's "Reparations," a weeklong journey into the hellish heart of the Holocaust sends ripples of pain and despair through two generations. Barley's "Woman in the Wood" tells the story of a connection between a husband and wife that transcends the bonds of one lifetime. Joiner's genre-defying "Queen of the Fairy Feys" shows us there is a life-affirming journey available to us all, even when time seems already to have run its course.

I am one of the four authors of this anthology. The stories were all written in a seven day period, part of the limits set by sponsoring publisher who set up the competition, prize to be publication. All of the entrants had thus to create a finished work in one week, based on the theme sentence issued (by e-mail) on a Friday evening. The sentence was 'Seven Days In December". The completed files had to be received exactly seven days later, to the minute. The result was the book you see advertised here.

Jim Tomlinson lives and writes in Central Kentucky. His short fiction has been published throughout the region, most recently in When Love was Young, Stories from Emerging Kentucky Writers. Robert Laszlo is a New York lawyer and an editor of the webzine InkSpin.
Michael Barley, a Canadian architect, has previously published the science fiction novel, Jackal Bird. Since then, his novel, Northline has also been published.
Leila Joiner is an editor, book designer and publisher living in Tucson AZ. Her poetry has been published in Voices on the Last Frontier: Selections from San Diego Poets.

Book Description Imago Press 2002-11-22, 2002. Paperback. Condition: Good. Item is in good condition. Some moderate creases and wear. This item may not come with CDs or additional parts including access codes for textbooks. Might be an ex-library copy and contain writing/highlighting. Seller Inventory # DS-0972530304-3