Items related to Provisions for the Seekers: A Manual of Prophetic Hadiths...

Provisions for the Seekers: A Manual of Prophetic Hadiths with Commentary 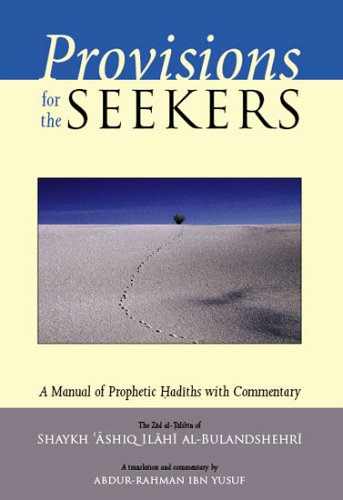 Imam Nawawi wrote: The science of hadith is the noblest means of attaining closeness to the Lord of the Worlds Muhammad, the Messenger of God (upon him be peace) was given exceptional oratorical skills. His words were eloquent, comprehensive, and simple, conveying libraries of wisdoms and truths. The Messenger (upon him be peace) himself said, I have been sent with the jawami al-kalim (Bukhari) that is, pithy language that expresses a multitude of meanings in few words. Bookstores and libraries today are full of books of proverbs, coined by historical personages and political and religious leaders. But each of these pales in comparison to the eloquence of the Messenger of God (upon him be peace) and philosophers and sages seem nothing more than struggling students in the light of his divinely inspired wisdom. This book is a collection of 327 hadiths which the author, Shaykh 'Ashiq Ilahi al-Bulandshehri, compiled from 'Allama Tabrizi s renowned hadith compilation, Mishkat al-Masabih. The book contains many jawami' al-kalim, as well as prophecies and other accounts and narratives. The book is ultimately a compilation of hadiths meant to inspire the souls of today s Muslims and give them a glimpse at the charisma of the Prophet Muhammad (upon him be peace) and a roadmap with which they can achieve closeness to their Lord. This work is taught in many of the madrasas around the world as a first hadith work. Now it is available in this beautifully bound English edition with a commentary from the classical sources.

Mufti Abdur-Rahman ibn Yusuf Mangera, has been studying the traditional Islamic sciences and writing scholarly works for most of his life. He completed the bulk of his studies at Darul Uloom Bury, North England, where he memorized the Qur an by age fifteen and thereafter went on to complete a rigorous, six-year Shari a program. He graduated from this program with authentic certifications [ijaza] in numerous Islamic disciplines, including Arabic, Islamic jurisprudence, and hadith (with particular emphasis on the six authentic books of hadith [Sihah Sitta] and the Muwattas of Imam Malik and Imam Muhammad). His teachers at Darul Uloom Bury included Shaykh Yusuf Motala and other students of Shaykh al-Hadith Mawlana Muhammad Zakariyya Kandhlawi. Shaykh Ashiq Ilahi al-Bulandshehri a prolific writer and eminent scholar of the Indian Subcontinent, Shaykh Ashiq Ilahi al-Bulandshehri (or al-Barni) was born in 1343 ah in Bulandshehr of Uttar Pradesh. After attaining his primary education at Madrasa Imdadiyya Moradabad and Jami Masjid Aligarh, he traveled to Mazahir Ulum Saharanpur in pursuit of higher knowledge. After completing his studies, he taught various subjects at Ferozpur Jhirka, Hayat al-Ulum Moradabad, and at different madrasas throughout Calcutta. He later taught at Dar al- Ulum Karachi for several years at the request of Mufti Muhammad Shafi , where he assumed responsibility of the fatwa department and taught students hadith and tafsir. The Shaykh later migrated to Madina, where he spent the last 25 years of his life. He was a disciple of the hadith scholar Shaykh Muhammad Zakariyya Kandhlawi. Dozens of his books have been well received in many countries. Tohfa-e khawatin (Gift for women), Marne ke bad kya! h ga? (What is going to happen after death?), Islami adab (Islamic conduct), Huquq al-walidayn (Rights of parents), and Anwar al-bayan (Illuminating discourses on the Holy Qur an), a voluminous commentary of the Qur an, are among the well-known books he authored. In the field of hadith, he authored Zad al-talibin (Provisions for the seekers) and Al-Fawa id al-saniyya fi sharh al-Arba in al-Nawawiyya (The lofty beneficial points in the explanation of Nawawi s Forty Hadiths). As for jurisprudence, he is the author of Al-Tashil al-daruri fi masa il al-Quduri (The necessary facilitation of the laws of Quduri), as well as dozens of reformative booklets and articles. He passed away in the illuminated city of Madina at the age of 80 and was buried there in the Baqi graveyard, as had been his desire.

The translation and commentary is at a level that provides complete understanding of the content. --F Banales

Easy to read and concise, yet at the same time carries a heavy message. --M. H.

Easy to read and concise, yet at the same time carries a heavy message. --M. H.

Another awesome book from www.whitethreadpress.com --S.M.

1. Provisions for the Seekers: A Manual of Prophetic Hadiths with Commentary

2. Provisions for the Seekers: A Manual of Prophetic Hadiths with Commentary

3. Provisions for the Seekers: A Manual of Prophetic Hadiths with Commentary

4. Provisions for the Seekers: A Manual of Prophetic Hadiths with Commentary

5. Provisions for the Seekers: A Manual of Prophetic Hadiths with Commentary

6. Provisions for the Seekers: A Manual of Prophetic Hadiths with Commentary [Hardcover] Abdur-Rahman ibn Yusuf and Ashiq Ilahu Bulandshehri