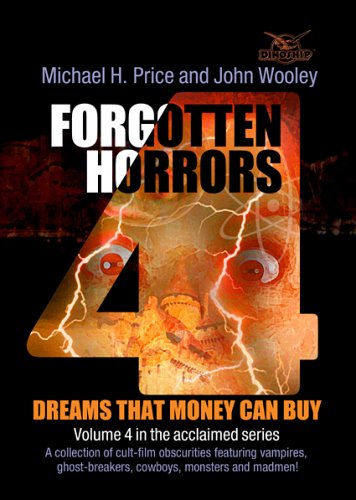 By laying down a dime or 15 cents at the box office, a gawky, socially awkward kid could live for a few hours in a dream world of jitterbugs and bobbysoxers, running right alongside Poverty Row stars bravely entering forbidding haunted houses and creepy cemeteries. And that is what most of the pictures in this volume are: little dreams, made all the more dreamlike by their obscurity. The pictures are not big-studio productions full of high-wattage star power, but quirky titles from little studios. Forgotten Horrors 4 remains focused on the tawdry (but no less magical) Hollywood backstreet known as Poverty Row. From their Poverty Row vantage, actors gazed out at the Golden City just beyond their grasp and, between shots on cheap sets in quickie productions for directors far beneath the station of DeMille, imagined life as Gregory Peck or Loretta Young. Seen today, these small-studio pictures carry a quirky, almost heartwarming nobility. They know what they are, and the people involved allowing for factors ranging from disillusionment to cynicism to John Barleycorn seem to be doing the best they can. They know it s not MGM or Paramount. But anyway, they are working. Without the bankable stars that all America knew, the people who made these films had to have Something Else going for them. And that Something Else was almost always an exploitable angle, something the theater owners could sell in lieu of marquee names. In the pictures examined between these covers, that Something Else was a horrific or bizarre element of one sort or another, ranging from simple murder to terrors far more fiendish. In the Westerns and the comedies, the horror element often came as a lagniappe, giving an extra thrill to the folks who probably would have shown up anyway. And rather than fading into obscurity, these little gems still manage to entertain us almost 60 years after their debuts.

Michael H. Price first began mining the Forgotten Horrors lode in 1975, in collaboration with the film historian-turned-filmmaker George E. Turner. The first such book, published in 1979, has become a perennial and influential collection, casting an unprecedented light onto ill-explored corners of film history. Forgotten Horrors yielded a sequel in 2001, then a third volume in 2003. This fourth book expands the overall sweep to a period spanning 1929 1948. Price, a veteran newspaperman and founder of Texas Fort Worth Film Festival, has recently completed the collaborative graphic novel Fishhead, a horrific Southern Gothic; Mantan the Funnyman, a biography of the pioneering black comedian Mantan Moreland; and Daynce of the Peckerwoods, a study of Texas indigenous music-making traditions. Price & Turner s graphic novella, The Ancient Southwest & Other Dispatches from a Cruel Frontier, has recently arrived from Texas Christian University Press. Price s weekly film commentaries for The Business Press of Fort Worth can be found, both fresh and preserved, on the Web at www.fortworthbusinesspress.com. John Wooley, a prolific novelist, journalist and scriptwriter, joined Price as co-author of the Forgotten Horrors books following the death of George Turner in 1999. The Price & Wooley projects also include The Big Book of Biker Flicks (2004), Forgotten Horrors 3: Dr. Turner s House of Horrors (2003), and a recurring Forgotten Horrors column for Fangoria magazine. Wooley s recent solo books include Ghost Band, From the Blue Devils to Red Dirt: The Colors of Oklahoma Music, Awash in the Blood and Dark Within, in addition to a well-received reissue of his breakthrough collaborative novel of 1982, Old Fears. Wooley s radio program, Swing on This, airs weekly over Tulsa s KWGS FM (www.kwgs.org) as a showcase for Western swing and other South-by-Southwestern musical forms. Updates: www.johnwooley.com.