Items related to Symmetry and the End of Probability

DangSon Symmetry and the End of Probability

Symmetry and the End of Probability 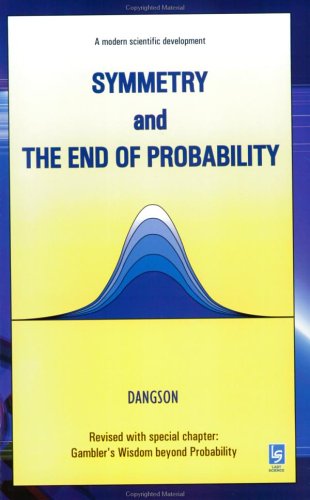 Despite strong objections from many scientists since the time of its conception, the Probability theory has been able to maintain its precarious but dominant existence for three centuries simply because no one could pinpoint its logical weaknesses; but this may soon change.

Building on recent advances in computing science and complexity theory, DangSon was able to identify a fatal loophole in the probabilistic proof for the Law of Large Number. With the discovery that the principle of symmetry is a much more complete explanation for the Law of Large Number, suddenly it becomes clear that time may finally be over for the Probability theory.

Not just an alternative explanation for existing phenomena, this book introduces the fully testable Distribution theory, with conclusive empirical results to show why Symmetry, not Probability, is the underlying principle of the so-called random processes of science and life.

An intellectually challenging and revolutionary thesis delivered in a style accessible to the layman, with a special chapter dedicated to the games of chance, ?Symmetry and the End of Probability? is a must-read for everyone.

DangSon is the pen name of Dr. Thinh Tran. He received a BS degree in 1976 from the University of Southern California, and a Ph.D. degree in 1981 from the University of Minnesota, Twin Cities; both in chemical engineering. His thesis work included experiments with dust particles and a mathematical analysis of cyclonic turbulent flows. His interest in and dissatisfaction with the Probability theory began when he took a graduate course in statistical mechanics at the University of Minnesota. While working in the high-tech industry and having to solve statistics-related problems on a daily basis, he started an independent research on probability and statistics in 1988. After seven frustrating years with no measurable progress, the breakthroughs reported in this book finally occurred during an extended overseas assignment in Asia that lasted from May 1995 to December 2001.