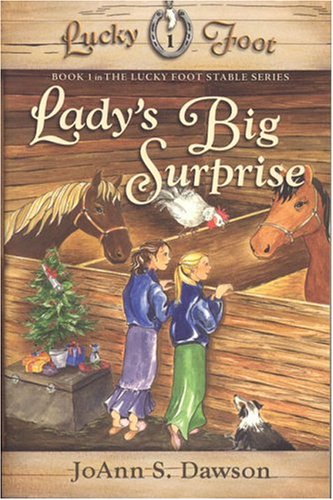 Venturing from the little white barn they call Lucky Foot Stable, epic friends Mary and Jody embark upon a series of adventures with their ponies Gypsy Amber and Lady, sharing hour after hour of imaginative exploits. Aided by Willie, the aging farmhand,

A horse lover since childhood, JoAnn S.Dawson lives with her husband Ted and their two sons on a horse farm in Maryland where they operate a bed & breakfast and offer riding lessons, carriage rides, horse shows and a summer camp. JoAnn teaches Equine Science at a local college and is an actress and animal wrangler for film and television. She has enjoyed competing
over the years on her American Paint Horse, Painted Warrior, but it is Butterscotch the pony who accompanies her on school visits and book signings. Butterscotch is so comfortable around kids that he may be the only pony in the country who is allowed to go into classrooms!

"A HORSE SHOW! That's it! Why didn't I think of it before?" Mary shouted from her perch high on the bales of hay stacked in the loft of Lucky Foot Stable. Mary often went to the loft to think and was occasionally rewarded with a brilliant idea. "I've got to find Jody and see what she thinks! Come on, Finnegan!" She grabbed the knotty end of the creaky rope swing and swung herself down to the dirt floor, Finnegan the farm dog nipping at her heels and Colonel Sanders, the old white barn rooster, squawking indignantly at the uproar. Mary ran around to the side of the big white dairy barn and looked over the gate to the pasture field, where she could just make out Jody's form as she lay flat on her back on a horse blanket under the bare branches of the weeping willow tree.

"I knew that's where she'd be," laughed Mary. "I knew it, Finney!" And she flew across the pasture to share her latest great idea with Jody. Mary knew where Jody would be because Mary knew just about everything about Jody and her habits. Mary and Jody were friends. They weren't just good friends, or even best friends. They were, as Mary put it, "epic friends."

"Epic means 'in the grand style, lofty in conception, and memorable!'" Mary liked to say. "I looked it up!"

Mary liked to say a lot of other things too. In fact, talking was one of Mary's favorite activities in the world, and Jody mostly liked to listen. But there were two things that brought them together and linked them forever ("never to be parted," they solemnly agreed) and best of all, gave them something to do together all through the long days of summer vacation and endless wintry weekends.

Those two things were . . . the ponies! Mary's pony was the color of milk chocolate, with a silky white mane and tail and four white stockings. Mary imagined that she had been born of a wild mustang and transported across the untamed plains by gypsies. So, when it came time to name the spunky mare, Mary solemnly touched the end of a riding crop gently to her shoulder and said, "I dub thee Gypsy Amber- Gypsy because it sounds romantic and Amber for the amber waves of grain on the plains!"

Jody contented herself with the original name of her pony, since everyone knows it's bad luck to change a pony's name. It was not nearly as wild and mythical a name as Gypsy Amber, but Jody didn't mind. Jody's pony was simply named Lady.

Lady was the color of copper pennies, with uneven white patches over her withers, a small patch of white on her hindquarters, two white socks on her front legs, and a wiry black mane and tail. Of course, Mary took it upon herself to invent a suitable story
for Lady's background.

"Lady was an Indian pony who used to hunt wild buffalo before coming here," Mary claimed. "Her name is really Lady White Cloud, because her patches look like clouds. And anyway, I'm sure the Indians always name their horses that way."

"Jody Stafford, what in the world are you doing?" Mary asked with her hands on her hips, looking down at Jody looking up. "It's cold out here, isn't it?" Jody pointed skyward at the lazy drift of the wispy clouds. "I'm watching the mare's tails and keeping
Lady and Gypsy company, just like I always do. And when I get cold, I wrap up in the blanket. What are you doing?" Jody asked sweetly.

"I've been waiting in the stable for you to come in so I can tell you my great idea!"

"I didn't know you had a great idea, or I would've come in sooner," Jody said, sitting up and squinting into the sun. "What is it?"

"Well," Mary grinned, squatting down just enough so that Finnegan could lick her face.
Finnegan was a herding dog-black and white with little brown patches over both eyes and a real talent for rounding up the cows at milking time. "Finney, quit it. Jody, remember how we've been practicing our jumping and our circus act with the ponies and wishing we could show off how great they are to an audience, but nobody ever sees us?" Mary asked, all in one breath.

"Yeah," Jody said expectantly.
"Well, all of a sudden it hit me-we can take the ponies to a horse show and enter some classes. Then everybody would see how great they are, and we could win all sorts of ribbons and trophies!"

Jody's hopeful expression suddenly fell at this pronouncement. "I don't know, Mare . . . we've never even been to a horse show, much less entered classes in one! We've just been stuck here on the farm, cantering around in the pasture, jumping logs and stuff."

"Jody, you'll see. You just leave it to me. We'll go get Willie and see if he'll take us to town, to the feed store. That's where I've seen all the flyers about horse shows!" And off she flew across the pasture.

"But Willie's milking the cows! You know he doesn't like to be bothered when he's milking!" Jody yelled after her.

But Mary ran on, Finnegan yipping with excitement close behind.