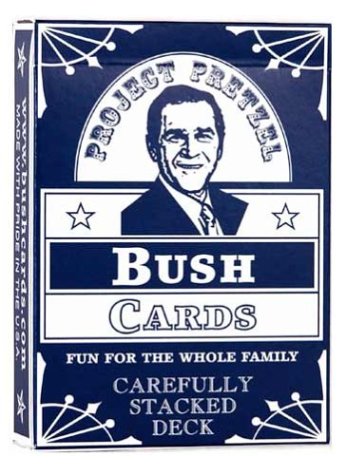 See what all the fuss is about! The original and still the best! As seen on CNN and in the NEW YORK TIMES and NEWSWEEK: Bush Cards are casino quality, poker-sized, professionally printed playing cards chock full of Bush administration photos and hilarious quotes, facts, and figures. These decks are ready to be shuffled, cut, dealt, and collected.

Do you know who in the Bush administration is an ex-con? Or who never graduated from college? Can you guess the cabinet member who had an oil tanker named after them? Do you know whose nickname is "Yoda" and whom George W. Bush calls "Turd Blossom"?

Each deck of Bush playing cards features 52 Bush administration officials and their closest cohorts, plus two jokers -- perfect for your next game of Texas Hold'em.

The deck contains all your favorites from the first term. Already in the permanent collections of leading international museums, this edition is a great primer for the Bush Cards Second Term Edition coming out in July 2005.