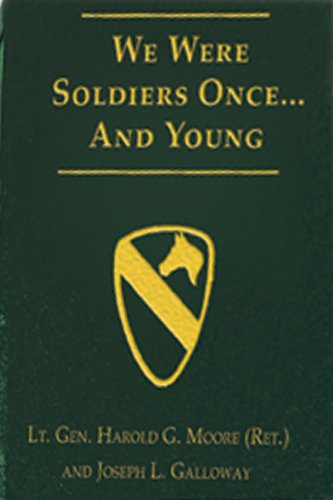 General Harold (Hal) Moore and Joe Galloway have both hand signed this limited edition. Each book is leather-bound and stamped in gold with gold edges. Each book comes with built-in satin bookmark, silk moire end-sheets, Certificate of Authenticity, hand numbered and dual, matching holographic seals on both book and COA for increased security and authenticity. Plus, each book comes with an actual, original photograph of both General Moore and Mr. Galloway hand signing each book! Each book is NEW, MINT in condition and comes from the publisher still sealed in factory shrink-wrap. Embossed, gold seal of the Army Infantry Badge appears at the top of each signed page. A copy of this book was presented to Medal of Honor recipient along with his actual medal in 2007. General Moore and Joe Galloway have their own personal copies of this book and have both endorsed this publication and the publisher, FlatSigned Press. This book is considered to be THE book on the USA's involvement in the Vietnam War. It is dedicated to the memory of both those who gave their last full measure and to all those who served our country and were fortunate enough to return. Welcome Home!

In the first significant engagement between American troops and the Viet Cong, 450 U.S. soldiers found themselves surrounded and outnumbered by their enemy. This book tells the story of how they battled between October 23 and November 26, 1965. Its prose is gritty, not artful, delivering a powerful punch of here-and-now descriptions that could only have been written by people actually on the scene. In fact, they were: Harold Moore commanded the men of the 1st Battalion, 7th Cavalry, who did most of the fighting, and Joseph Galloway was the only reporter present throughout the battle's 34 harrowing days. We Were Soldiers Once... combines their memories with more than 100 in-depth interviews with survivors on both sides. The Battle of Ia Drang also highlights a technological advance that would play an enormous role in the rest of the war: this was perhaps the first place where helicopter-based, air-mobile operations demonstrated their combat potential. At bottom, however, this is a tale of heroes and heroism, some acts writ large, others probably forgotten but for this telling. It was a bestseller when first published, and remains one of the better books available on combat during the Vietnam War. --John J. Miller

In November 1965, some 450 men of the 1st Battalion, 7th Cavalry, under the command of Lt. Col. Hal Moore, were dropped by helicopter into a small clearing in the Ia Drang Valley. They were immediately surrounded by 2,000 North Vietnamese soldiers. Three days later, only two and half miles away, a sister battalion was chopped to pieces. Together, these actions at landing zones X-Ray and Albany constitute one of the most savage and significant battles of the Vietnam War. The Americans faced what seemed to be certain destruction. How these men persevered - sacrificed themselves for their comrades and never gave up - makes a vivid portrait of war at its most inspiring and devastating. General Moore and Joe Galloway, the only journalist on the ground throughout the fighting, have interviewed hundreds of men who fought there, including the North Vietnamese commanders. The result is a story of unparalleled human interest. We Were Soldiers Once... and Young also brings the war back home with unforgettable stories of those who lost family members to combat. This devastating account rises above the specific ordeal it chronicles to present a picture of men facing the ultimate challenge, dealing with it in ways they would have found unimaginable only a few hours earlier. It reveals to us, as rarely before, man's most heroic and horrendous endeavor.