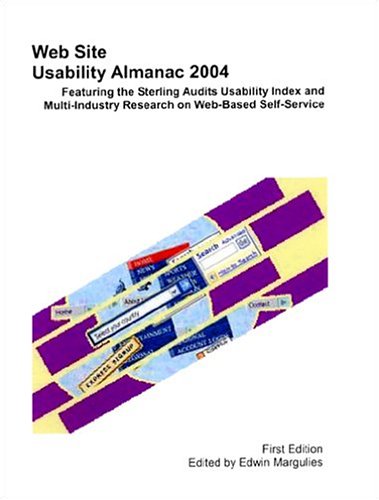 Web Site Usability Almanac 2004 The Web Site Usability Almanac 2004 is a landmark study in the usability of commercial and non-profit web sites, with an eye on customer service and automation. The Almanac represents the output of a joint research initiative sponsored by Sterling Audits' own research staff and its research affiliates. The research base includes thousands of web sites from 9 industry segments including: Communications; Financial Services; Government; Healthcare; Insurance; Manufacturing; Retail; Transportation; and Utilities.

The Almanac concentrates on survey results of each web site in five critical areas: Navigation; Content; Usability; Interactivity; and Credibility. Scores for these critical areas are be tabulated using the Sterling Audits Research Portal software. Research questions are crystallized into small chunks of data that bubble up to the five focus areas mentioned above. Over 200 data points are used from each web site. Each of the five critical areas is assigned 20 points out of a possible 100. Weights are used in each area based on the criticality of the item.

The Almanac is arranged by chapter. There is an introductory chapter, a chapter on approach and methodology - and the rest are dedicated to the survey results in the five critical areas. There are over 200 graphs and charts in this almanac. We list the upper quartile, median and lower quartile averages for each category.

Who should buy this report?

If you are a stakeholder in web site self-service and customer service automation – you should own this report. The benchmarking data will reveal what "best in class" is for each covered industry. You will be able to peg the top performance averages in each segment and each critical survey area. This information can be used to benchmark your own system performance and ultimately may save you thousands, if not millions of dollars in automation efficiencies.

Margulies is a prolific author with 17 high-tech books published covering speech processing, internet-based self-service, contact centers and network architecture. This includes popular titles such as: Understanding the Voice Enabled Internet and Client Server Computer Telephony. He is also an inventor with several patents awarded and pending for telecom and internet-based communications systems. He is perhaps the industry’s most active service automation strategist. Margulies is on the board of directors of AVIOS, the Applied Voice I/O Society, where he provides guidance to the organization on marketing and business strategy.

A 25-year industry veteran, Margulies has designed and implemented hundreds of enterprise self-service systems – both in the network and in contact centers. He helped launch start-ups Dialogic (acquired by Intel), Voicetek (acquired by Aspect) and Telephony@Work. The term "UnPBX" (also spelled Un-PBX) was coined by Margulies in 1996 and popularized by his articles and books. UnPBX is now part of the worldwide telecom lexicon – with over 5,000 hits on Google.

Margulies spearheaded the carrier enhanced services and OEM effort at Voicetek in the early eighties. He was part of designing many large-scale interactive self service systems in use at the top five telcos. This included HOBIC automation, pay-per-view, automated collect calling and enhanced intercept systems – all standard systems today. As Director Enhanced Services at Dialogic, he helped launch a major open architecture initiative called SCSA (Signal Computing System Architecture). SCSA later folded into the now popular ECTF S.100 call control standard which is used in the majority of microprocessor-based systems. He also invented and was awarded a patent for an ANI conversion and routing system at the same company. The system is the basis for enhanced network deployments worldwide. Numerous other patents for self-service systems are pending. These include patents for web-based fault tolerance, multi-channel routing and disaster recovery systems.

After holding managerial positions at Telephone Response Technologies and CMP Media in the nineties, he helped launch the first network-based multimedia ACD at Telephony@Work – now in use under OEM arrangement at several top carriers. During this time, he penned the "CT Periscope" column for Computer Telephony Magazine. Margulies received his BA from Indiana University of Pennsylvania’s Charter Journalism School. The author is also a well-known speaker and organizer of industry conferences.