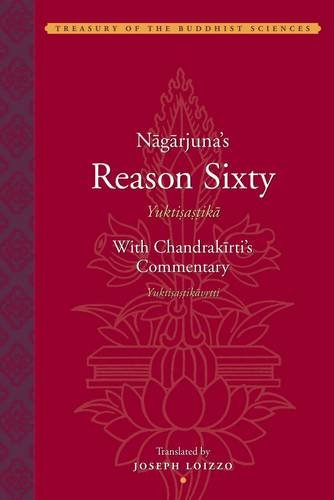 The Reason Sixty is the most concise philosophical work by the second-century Indian Buddhist philosopher Nagarjuna. It is one of that master's works most often cited by Centrist (Madhyamaka) commentators, and it is included in the Sixfold Canon of Reason (rigs tshogs drug) which forms the textual basis for Centrist studies in the Tibetan philosophical curriculum. Standing midway between his other masterpieces on philosophy and religion, in the Reason Sixty Nagarjuna describes the central thrust of his therapeutic philosophy of language - the elimination of cognitive bias and affective resistances to the gradual cultivation of nondualistic wisdom and compassion.

The seventh-century Centrist master Chandrakirti, concerned with applying his language therapeutic method to define the social epistemology of Centrism, likewise links the critical hermeneutic-pedagogy and the practical therapeutic-anthropology of his other works in his acclaimed Reason Sixty Commentary.

Joseph Loizzo is an adjunct assistant professor in the Religion Department at Columbia University.

Book Description American Institute of Buddhist Studies, 2007. Hardcover. Condition: GOOD. Has little wear to the cover and pages. Contains some markings such as highlighting and writing. Supplemental materials are not guaranteed with any used book purchases. Seller Inventory # 0975373420_abe_gd

Book Description American Institute of Buddhist Studies, 2007. Condition: Good. A+ Customer service! Satisfaction Guaranteed! Book is in Used-Good condition. Pages and cover are clean and intact. Used items may not include supplementary materials such as CDs or access codes. May show signs of minor shelf wear and contain limited notes and highlighting. Seller Inventory # 0975373420-2-4