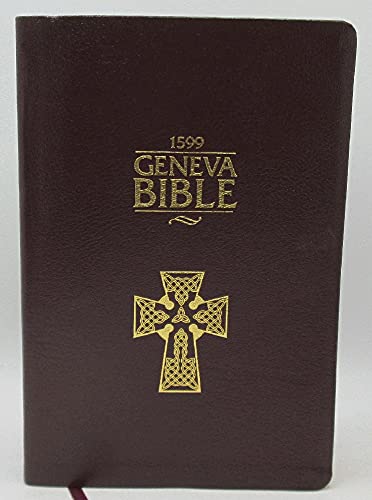 When the Pilgrims arrived in America in 1620, they brought along supplies, a consuming passion to advance the Kingdom of Christ, a bright hope for the future, and the Word of God. Clearly, their most precious cargo was the Bible. Have you ever wondered what version of the Bible the Pilgrims brought to America on the Mayflower? Believe it or not, it was not the King James Version of 1611. It was actually the 1599 Geneva Bible - a forgotten yet priceless treasure. The Geneva Bible, printed over 200 times between 1560 and 1644, was the most widely read and influential English Bible of the sixteenth and seventeenth centuries. This superb translation was the product of the best Protestant scholars of the day and became the Bible of choice for many of the greatest writers, thinkers, and historical figures of that time. Men such as Shakespeare, John Bunyan, and John Milton used the Geneva Bible, and it was reflected in their writings. During the English Civil War, Oliver Cromwell issued a pamphlet containing excerpts from the Geneva Bible to his troops. William Bradford cited the Geneva Bible in his book Of Plymouth Plantation. The Geneva Bible is unique among all other Bibles. It was the first Bible to use chapters and numbered verses and became the most popular version of its time because of the extensive marginal notes. These notes, written by Reformation leaders such as John Calvin, John Knox, Miles Coverdale, William Whittingham, Anthony Gilby, and others, were included to explain and interpret the scriptures for the common people. For nearly half a century these notes helped the people of England, Scotland, and Ireland understand the Bible and true liberty. King James despised the Geneva Bible because he considered the notes on key political texts to be seditious and a threat to his authority. Unlike the King James Version, the Geneva Bible was not authorized by the government. It was truly a Bible by the people and for the people. You can see why this remarkable version with its profound marginal notes played a key role in the formation of the American Republic. Sadly, 407 years after its original publication, this wonderful version of the Bible has been nearly forgotten. The only complete version available today is a large, cumbersome, and difficult-to-read facsimile edition. A facsimile edition contains pictures of the original pages. The small print and the older English letters and spellings make it nearly impossible to read or study. If the 1599 Geneva Bible is to survive the passing of time and be remembered for generations to come, it must be resurrected and redistributed. Features: # Word-for-word accuracy with the 1599 Geneva Bible # Original cross references # Modern spelling # Original study notes by Reformers # Old English Glossary # Easy-to-read standard size print # 6.5 x 9.5 # FREE CD-ROM which contains searchable, printable PDFs of the Geneva Bible, plus the Apocryphal Books and Metrical Psalms