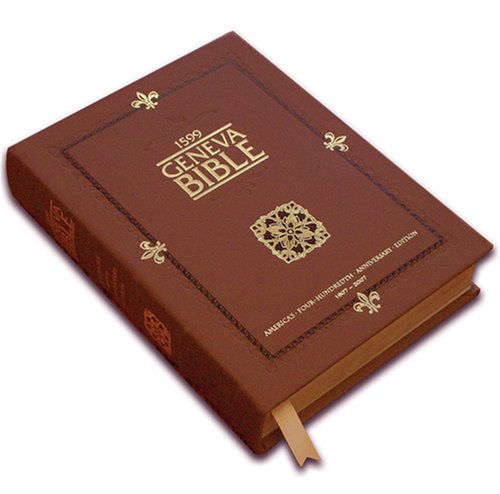 When the Pilgrims arrived in the New World in 1620, they brought along supplies, a consuming passion to advance the Kingdom of Christ, and the Word of God. Clearly, their most precious cargo was the Bible specifically, the 1599 Geneva Bible. All but forgotten in our day, this version of the Bible was the most widely read and influential English Bible of the sixteenth and seventeenth centuries. A superb translation, it was the product of the best Protestant scholars of the day and became the Bible of choice for many of the greatest writers and thinkers of that time. Men such as William Shakespeare, John Bunyan, and John Milton used the Geneva Bible in their writings. William Bradford also cited the Geneva Bible in his famous book Of Plymouth Plantation. The Geneva Bible is unique among all other Bibles. It was the first Bible to use chapters and numbered verses and became the most popular version of its time because of the extensive marginal notes. These notes, written by Reformation leaders such as John Calvin, John Knox, Miles Coverdale, William Whittingham, Anthony Gilby, and others, were included to explain and interpret the scriptures for the common people. Tolle Lege Press is pleased to announce the release of the America s Four-Hundredth Anniversary Edition of the 1599 Geneva Bible (1607-2007). This special family edition of the 1599 Geneva Bible is re-introduced by Dr. Marshall Foster who reveals remarkable accounts from history of how the Geneva Bible played a key role in the settling and building of America beginning in 1607. The Geneva Bible is credited as the Bible that built America and its republication is providentially planting seeds for America s restoration. This new commemorative edition is larger (8.75 x 11.5) and is hardbound in a genuine leather that is embossed and stamped with gold. The pages are also gilded in gold and a special section has been added in the front of this Bible for a family tree, record of births, marriages, and deaths. This luxurious edition is truly a Family Bible that will be cherished by your family for many generations.