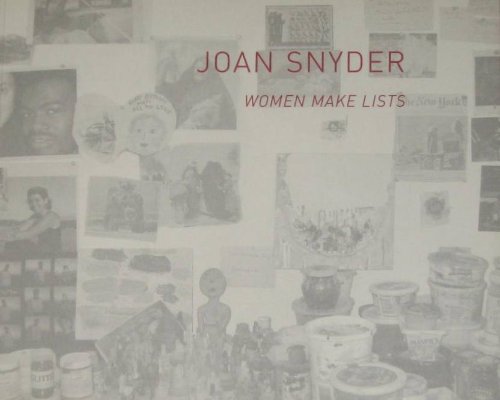 In November 2004, Betty Cuningham Gallery opened its first show of the paintings of Joan Snyder. The exhibition, Joan Snyder: Women Make Lists, was comprised of approximately 20 paintings completed by Snyder since 2002. Snyder, whose exhibiting career in New York spans over 35 years, is known for her deeply felt paintings. The works range from full fields of color strokes to surfaces built-up with flowers or words, pumpkins or moons; sometimes combined or overlapping. Consistently, Snyder's paintings are also invested with her personal politics regarding women, children, the environment and war. This exhibition, Women Make Lists, serves to list all aspects of Snyder's painting; the vocabulary of images and the bearing of human conscience. The artist has said that, post 9/11, her desire has been to make beautiful paintings; however, recently her politics cut more deeply. Snyder dedicates this exhibition to the women of Iraq, stating in the accompanying catalogue: "The people of Iraq and most especially its women and children were in my thoughts constantly as I made these paintings. This show is dedicated to them. I firmly believe that we need to send powerful female energy and imagery out into the universe if our world is to survive the horrific violence being inflicted upon it." The exhibition, Joan Snyder: Women Make Lists, was accompanied by a catalogue with an introduction by Regina Coppola, Curator at Art Center, University of Massachusetts, Amherst. Snyder's work can be seen in New York City in the collections of The Museum of Modern Art, The Metropolitan Museum of Art, The Whitney Museum of American Art and the Jewish Museum in New York and also in several museums throughout the country including The High Museum (Atlanta), The Philadelphia Museum and The Dallas Museum of Fine Arts. (From Betty Cuningham Gallery website, 2004)