Items related to Native Son: American Poems from the Heart of Oklahoma

Native Son: American Poems from the Heart of Oklahoma 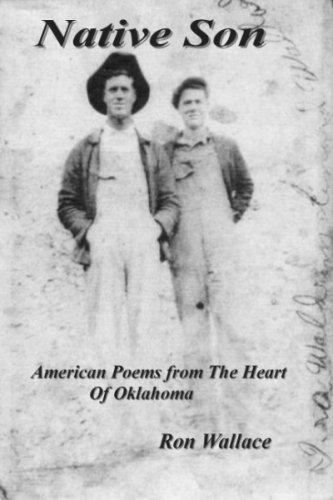 In 1830 the Treaty of Dancing Rabbit Creek would force the Choctaw People to begin their long sad walk along their Trail of Tears. Soon afterward the Cherokees would be forced down their own trail as well, while other Native Peoples were being moved from all across the country into Indian Territory. Over hundreds of miles in the dead of winter, entire tribes were torn from their native lands and moved to a wild and unsettled country. Death and disillusionment became the commonplace order of the day, but ultimately these proud people would overcome the trauma and heartache and give this new land a new name taken from the Choctaw language. This place would become Oklahoma - a land of Red People. This is the land of which Ron Wallace speaks so proudly in his book, Native Son (American Poems From the Heart of Oklahoma). I feel the native pull of the land to my feet even now, / each time the redtail soars above me, / each time the bobcat or the fox crosses the open road / and disappears into the wild around me. He writes passionately of his love for family and friends and a set of values they and the land have instilled within him. He records the histories in the old way of father to son to grandson, and in so doing speaks for the universal nature of Oklahomans. A reader soon knows without a doubt, he writes from his heart, especially when he speaks of this state, which would give birth to a new strength in its people. In this land schools would be built, churches and democratic governments would arise with Native American men and women like a Phoenix from the ashes. Mr. Wallace captures this spirit in his poetry, a poetry of America, the common man, the laborers and educators, the red and white men and women who make up this great nation, this great state. It has become an integrated culture of many races, a culture seeking enlightenment and advancement while holding fast to a storied past and a history that made them strong. In his poem, Southern Thunder , he writes: There is a certain comfort in knowing / that we are a part of the land / both literally and figuratively, / that we become the roots, the anchors / holding worlds in place / strengthening the present with the past. This state with all its tribes, its many diverse peoples, rose up from the Great Depression and helped to reform the most powerful nation in the world. The Long Walks, the Trails of Tears, the Dust Bowl, the train of oppressive wars had taught this place how to carve a path through the most difficult times. It was the indomitable spirit of this Red Man s Land that helped forge this mightiest of countries. Such men as these could not be ignored. They lifted themselves, and with themselves, they lifted a state, an entire nation. In the words of the poetry here, you will find the hearts and the souls of the men and women. I am Oklahoma born, a native son / a part of the land The words of this work will carry themselves across even more generations. Like so many other great Oklahomans, Ron Wallace will make you feel the pride and passion, the history and honor of this place we call home, America, Oklahoma (Red People). Chief Gregory E. Pyle Choctaw Nation of Oklahoma

Ron Wallace is about as Oklahoman as it gets, born on Main Street in Durant in Doc Haney s Clinic. His father was a Durant policeman for almost thirty years rising to the Captain of the force. His mother was a housewife and Mom who enjoyed making crafts. Wallace grew up in Durant, attended George Washington Elementary on East Main Street, got his first job delivering The Daily Oklahoman for Ray Weger s News stand on Main Street, graduated high school there in 1972 and went there to Southeastern Oklahoma State University where he graduated in 1977 and obtained his Masters in English Education in 1983. After graduating college, he married his wife the former Jane Brantley, owner of Brantley s Flowers and Gifts, also from Durant. They have one son, Matthew who is graduating Durant High School this year. Ron is of Choctaw, Cherokee, Osage and Scots-Irish ancestry tracing his roots back to Arkansas and Georgia. He currently resides in Durant and teaches English and Humanities at Colbert High School, where he has taught for twenty-nine years in Colbert, Oklahoma. As a student at SOSU, he was influenced heavily by local author, Howard Starks; as well as Walt Whitman; James Dickey, and Robinson Jeffers. He was published in several small literary and university journals at the time. Putting his writing on hold as he started a family and a teaching career; he wrote very little for over twenty years, but revived his writing in the late 90 s. Recently he has begun to publish again. His work appears in Loch Raven Review, poetry/stet, Poetic Voices Magazine to name just a few. In January of 2007 the celebrated Romanian poet Vasile Baghiu translated some of Wallace s work into Romanian and published him in the Romanian Literary Magazine Convorbiri Literare. In 2004 he won several poem of the month competitions at the emergingpoets.com website and received the Featured Poet Award there which led to his publishing the book Native Son (American poems From the Heart of Oklahoma) with TJMF Publishing. Native Son was one of four finalists for The Oklahoma Book Award in poetry for 2006. The poetry is modern narrative free verse, almost a storytelling style, and is heavily laden with Wallace s love for Oklahoma and Durant in particular. Chief Gregory Pyle of the Choctaw Nation of Oklahoma graciously wrote the Preface for the book and former SOSU professor Dennis Letts wrote the Introduction. The book s current success has led him onto the reading circuit at libraries, schools, and bookstores around Oklahoma and North Texas as well as the Southern Festival of Books in Memphis, Tennessee last October and the emergingpoets Southern Tour in February 2007, reading in Columbia, Savannah, Charleston and Atlanta. He was also a featured poet at The New Jersey Writing Project of Texas Trainers Conference in Houston in March 2007.

"Native Son is a testament to Ron Wallace's hard work and dedication, but what I enjoy most in reading his work is his very apparent deep love of family and our great state." --Oklahoma State Representative - John W. Carey.

"The words of this work will carry themselves. Ron Wallace will make you feel the pride and passion, the history and honor of this place we call home, Oklahoma (Red People)." --Chief Gregory E. Pyle, Choctaw Nation of Ok

1. Native Son: American Poems from the Heart of Oklahoma