Items related to Defensive Racism: An Unapologetic Examination of Racial... 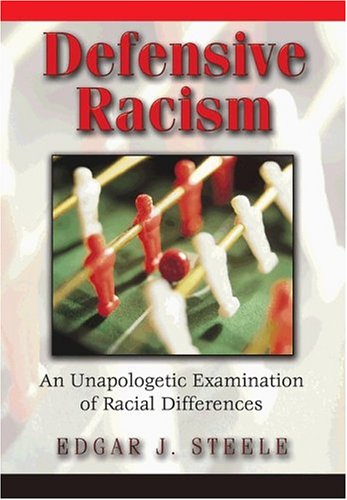 An overview of racism in America and chilling forecast of things to come, such as emerging intact from the coming economic meltdown and breakup of America, presents a bold, powerful, and persuasive argument to deal with racial differences we all recognize, yet pretend not to notice. Only the true racist, who hates others irrationally, based only upon skin color, will find this book unrewarding.

Do racial differences really exist?
Is racism ever justified?
What is racism, anyway?
Race War? In America?
Is racial separation inevitable?

Defensive Racism boldly and clearly explains:
- How racial differences make a difference.
- Illegal immigration - death of a nation.
- Practicing defensive racism without being racist.
- America gone mad - the emerging police state.
- No accidents, no coincidence - why things happen.
- The New World Order - America writ large?
- Why WWIII is coming - why it will end badly.
- Why gold will survive the death of the dollar.
- Emerging intact from the coming economic disaster.
- Staying safe in America - tomorrow’s "no-go" zones.

Two types of people will pick up this book because of its title:
- those who support racism in some form
- those who oppose racism in any form

Both will be surprised to find something here for them.

Only the true racist who hates others irrationally, based solely upon skin color, will go away empty handed.

EDGAR J. STEELE is a trial lawyer who has handled many cases noted for testing the free-speech and racially-charged limits of Constitutional law on behalf of politically-incorrect clients.

Known to some as the "Attorney for the Damned," Steele publishes a somewhat regular and almost always peripatetic weekly Internet commentary, wherein he intersperses his colorful and lively rants about the state of American society and politics with reports concerning high profile cases he handles.

Though Steele speaks infrequently in public, he has appeared on virtually every national TV network news program and been interviewed repeatedly for Today, Good Morning America, The Early Show, Fox News, Dateline, NBC Nightly News and CNN, as well as countless local television news programs and radio talk shows throughout America, in connection with both his writing and the high-profile cases he has handled.

A Financial Analyst in a former life, Steele has a BA in Finance from the University of Washington, an MBA in Accounting from UC Berkeley, as well as a Juris Doctorate from UCLA.

Edgar Steele lives in the Idaho Panhandle on a horse ranch with his wife of 19 years, their children and a host of animals, both domestic and wild.