Items related to The Critonomicon: A Guide to Critical Hits, Fumbles,...

The Critonomicon: A Guide to Critical Hits, Fumbles, and Magical Mishaps (TCM1001) 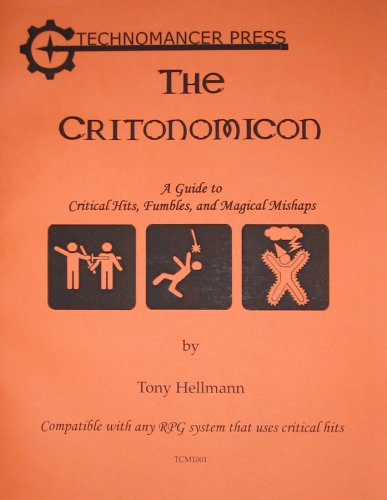 This book contains over 60 tables tailored to every need: simple, quick crits and fumbles decided by the roll of a d6; more sophisticated tables requiring a d20 or multiple dice, and our grand charts which have hundreds of possibilities. There are charts that are weapon specific and others that are opponent specific (mounted opponents, winged opponents, etc.). One of the spell fumble tables is even specific to spell level and school of magic!

The Critonomicon is a sourcebook of critical hits (and fumbles) from Technomancer Press. Ninety-four pages long, the book is thermal bound between a pair of orange covers. The front cover depicts generic figures being killed in rather amusing ways (the majority of which seem to be fumbles). The book has only one piece of interior artwork, a black-and-white image of a rather ferocious dragon just after the table of contents. The cover reads that the book is compatible with any RPG system, and while that s true, there s a definite nod to the d20 system in the book. Many (though by no means all) of the critical hit tables work by adding to the critical multiplier, for example. Likewise, the spell critical tables are broken down by d20 schools of magic and spell levels, even referencing d20 spells. The major strength of the Critonomicon, however, is the staggering multiplicity of critical hit and fumble tables it introduces. In the first four pages, we re given differing critical hit charts that use a d6, a d20, and a d100. And that is, quite literally, just the beginning. There are charts here that are designed to have special results ( skull cleaved in two (crown to neck); immediate death ); charts that cross-index body location with type of weapon (piercing/slashing/bludgeoning/bite); tables specific to each weapon type, both melee and ranged (to say nothing of the bullet and laser blaster tables); and specific hits for types of opponents such as mounted enemies, flyers, swimmers, and undead (providing an undead critical hit charts that, very creatively, says you can still inflict critical damage if you re literally crushing body parts), and that s still not all of the critical hit tables you ll find here. And that s only the first third of the book. After this come the fumble tables. Much like the crit charts, these cover a wide range, from what type of dice you want to roll, to weapon types, to even fumble types; if you want comedic fumbles or fumbles t --www.enworld.org