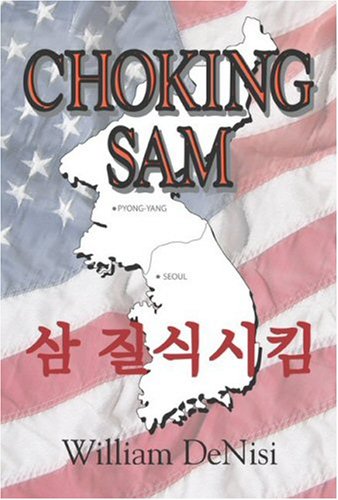 Choking Sam While global attention continues to be riveted on the Middle East, the North Koreans stumble upon the one thing that could instantly catapult their tiny country to world dominance. Their find is, literally, out of this world and its chilling potential for energy and weaponry far eclipses mere nuclear fission. The Koreans struggle to develop their secret and keep their people in line. Serial murder, deep sea exploration, international intrigue and enemy secret agents operating in the Southern California shadow of mouseville coalesce to provide another roller-coaster adventure for Orange County Sheriff's Detective Mike Sullivan and his sidekick, Charlie Gomez.

William DeNisi has a knack for taking current events and constructing entertaining, thought provoking fiction. In his debut novel, Trinity, he took us on wild ride which included serial murder, organ harvesting, fanatical middle eastern terrorists with radioactive bombs, a parade of creepy bad guys and a nuke in California. DeNisi's fans were left waiting for more. The wait is over.

Over his three decades of police work, Bill did every job from rookie to chief. Along the way he spent time in narcotics, vice and homicide. A veteran of Army intelligence and a graduate of the F.B.I. National Academy, he draws from his experience and the life and death issues of our time to weave compelling tales of crime and adventure.