Items related to You Don't Know Jack... or Jerry

You Don't Know Jack... or Jerry 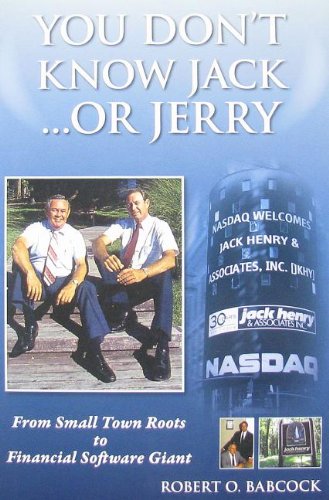 From the rear cover of this 233 page book: "Meet Jack and Jerry. Jack Henry and Jerry Hall launched a software company in theh back of a small engine repair shop. Thirty years later, Jack Henry and Associates, Inc., is a thriving operation with over 3,700 employees in close to 50 locations around the United States. They started writing software for a handful of community banks and now serve thousands of diverse organizations which rely on their financial solutions. JHA's annual revenue has grown to over $668 million. In the 1990s, their stock was the second best performing on the NASDAQ market, growing at an average compound annual return of over seventy-five percent. Talk about the American Dream. A couple of small-town guys had an idea, nurtured it, and worked hard to turn it into a reality bigger than anything either of them expected. Combine a visionary with someone who makes things happen, add a laser-like focus on taking care of their customers and their employees, and you have the foundations of Jack Henry and Associates' success. Jack and Jerry's story is one of friendship, and hard work. It is about what can happen when the desire to succeed overpowers the fear of failure. The JHA story is an inspiration for anyone with a dream and the desire to achieve it."