Items related to Sins of Darkness 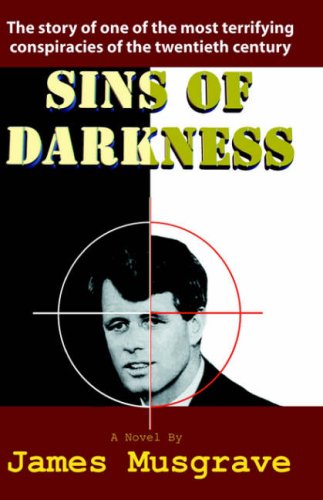 America was attacked by programmed assassins. Sins of Darkness shows how programmed terrorists were being created in the United States. Long before the training camps of Osama bin Laden, there was the programming of Sirhan Bishara Sirhan, a Palestinian refugee, who was ripe for the powers of the Sins of Darkness....

Sins of Darkness begins the exploits of Dr. Abigail Soloman, a Soledad Prison psychiatrist who puts her life and her reputation on the line to prove that convicted killer, Sirhan Sirhan, is a Manchurian Candidate assassin.

What if Robert F. Kennedy is assassinated by a fledgling group of extremists who hypno-program Sirhan Bishara Sirhan? This novel, the first in a series of Abigal Soloman Mysteries, shows how recent evidence discovered in Las Vegas in 1996 plunges fifty-five-year-old prison psychiatrist Soloman into a brainwashing and programming conspiracy group that has grown much larger than the one that killed Kennedy in the 1960s. In the fist part of the book, the history of the assassination of RFK is re-told through Soloman's eyes as she de-programs her patient, Sirhan Sirhan. The action covers actual historical events that took place in the 1940s, 50s and 60s, but the reader knows Abby is telling the story to prove that Sirhan was hypno-programmed. The author bases this Manchurian Candidate theory upon interviews conducted with Dr. Martin Schorr, a San Diego Forensic Psychologist who testified at both the Sirhan Sirhan and Jack Ruby trials. Thus, the theory of programmed hypnosis is not only possible but also, (according to Schorr and others) highly probable. In part two, Abby finds herself and her seventy-five-year-old mother, Sara, going to Las Vegas to infiltrate The Lord's Avengers, a group that has perfected programmed assassination and much more. Is Abby also a programmed victim of these sinister powers? Who is behind the group and why are they creating havoc and hysteria around the world? Sins of Darkness lets you answer these questions along with Abby and Sara Soloman--a most unlikely, but unusually adept detective partnership.

"If the soul is left in darkness sins will be committed. The guilty one is not he who commits the sins but he who causes the darkness."