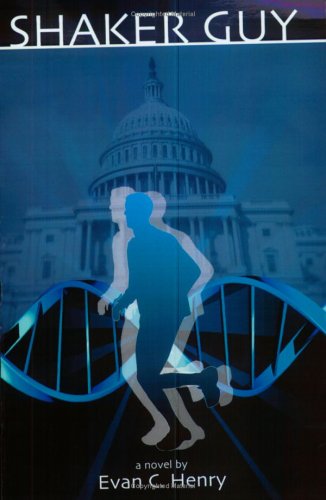 The word ‘diagnosis’ is intimidating enough without applying it to one’s own life and health.  SHAKER GUY is fiction but it is undeniably based in Evan Henry's own experiences with early onset Parkinson’s disease. His strategy for coping with the diagnosis and all its ramifications for the future included a need to identify, examine and confront the demons on paper.  When Evan sat down with pencil and paper, out came a story. SHAKER GUY takes Guy Hopkins from a life of winding down with Parkinson's to one where he is running for his life as the keeper of high secrets that Washington insiders don't want revealed.  Against the backdrop of stem cell politics, Parkinson's research and the mysterious death of his neurologist, Guy finds new strength and hope for his life with or without Parkinson's disease.

A lifelong environmental professional, Evan Henry has managed the environmental risk program worldwide for Bank of America for nearly two decades, concurrent with  activism and leadership in preserving natural open spaces. He makes his home in Southern California with his wife and two teenage daughters.  The love of his family has been the key to handling his struggle with Parkinson’s Disease for the past three years and their encouragement has helped him to continue public speaking and being interviewed on environmental and Parkinson’s issues despite the physical impacts of the disease.

Book Description Evan Henry, 2006. Condition: Good. A+ Customer service! Satisfaction Guaranteed! Book is in Used-Good condition. Pages and cover are clean and intact. Used items may not include supplementary materials such as CDs or access codes. May show signs of minor shelf wear and contain limited notes and highlighting. Seller Inventory # 0977859118-2-4

Book Description Evan Henry, 2006. Condition: Good. Former Library book. Shows some signs of wear, and may have some markings on the inside. Seller Inventory # GRP111536714