Items related to Think Indian: Languages Are Beyond Price

Think Indian: Languages Are Beyond Price 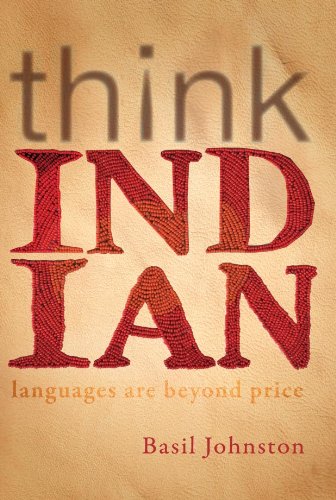 Think Indian is a collection of essays and presentations that Mr. Johnston has delivered to numerous educational conferences and gatherings across Canada and the United States. Topics covered, while all relating to the critical need to protect and encourage our language include how we are One Generation Away From Extinction, Cowboys and Indians to You can't tell stories in the summertime and the title essay Think Indian. Think Indian bumper stickers pleaded and advocated in the 60's, Think Indian. And while the plea may have been intended for general consideration, it represented in many instances a personal appeal for the exercise of a greater degree or intensity of Indianness, particularly by those who were prevented, for a variety of reasons, from practicing real Indianness. (Excerpt from book)

Basil Johnston has written 15 books in English and 5 in Ojibway to show that there is much more to North American Indigenous life than social organization, hunting and fishing, food preparation, clothing, dwellings and transportation. Among the books that Basil has written are Ojibway Heritage, Indian School Days, Crazy Dave, and Honour Earth Mother (Kegedonce Press). Basil believes the key to understanding culture is language and to this end he has developed audio programs on cassette and CD. For his work Johnston has received numerous awards including the Order of Ontario and Honourary Doctorates from the University of Toronto and Laurentian University.

Basil Johnston has long been one of my favorite writers. His is always a unique and truly indigenous voice whether his focus is on storytelling or the sacred, the history and culture of his own nation or his inspiring personal journey out of the labyrinth of the Indian boarding schools into prominence as an internationally known author. I always expect the best from Basil, but this new book exceeds my expectations. THINK INDIAN is at once amusing and thought-provoking, a fine blend of scholarship and storytelling. These well-crafted essays--ranging explorations of the importance of Native languages and prescription for their preservation to personal musings on the ironic positions in which modern native people find themselves--are a pure delight.- Joseph Bruchac (Author of the best-selling Keepers of the Earth: Native American Stories and Environmental Activities for Children from his Keepers series)

2. Think Indian: Languages Are Beyond Price

Book Description Kegedonce Pr, 2011. Condition: Good. A+ Customer service! Satisfaction Guaranteed! Book is in Used-Good condition. Pages and cover are clean and intact. Used items may not include supplementary materials such as CDs or access codes. May show signs of minor shelf wear and contain limited notes and highlighting. Seller Inventory # 0978499875-2-4