Items related to The Origin of the Word Amen: Ancient Knowledge the...

O. Kwame Osei The Origin of the Word Amen: Ancient Knowledge the Bible Has Never Told

The Origin of the Word Amen: Ancient Knowledge the Bible Has Never Told 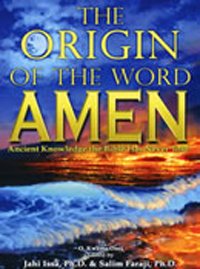 How did the word Amen become a sacred utterance in Judaism, Christianity, and Islam? Why does the word Amen appear as a proper noun in Revelations 3:14 and why does the sacred word appear in the Bible more than 60 times? Did you know that the Akan as well as other West African peoples are descendants of the Ancient Egyptians? Did you know that the African American spiritual "Amen" is a continuation of an ancient African hymn to the "God" Amen that can be found throughout Africa?

1. The Origin of the Word Amen: Ancient Knowledge the Bible Has Never Told

Book Description Amen-Ra Theological Seminary Press. Paperback. Condition: As New. No Jacket. An apparently unread copy in perfect condition. Dust cover is intact; pages are clean and are not marred by notes or folds of any kind. At ThriftBooks, our motto is: Read More, Spend Less. Seller Inventory # G0978577205I2N00