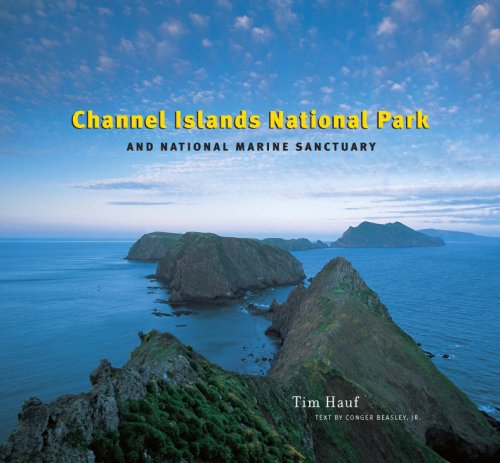 A short distance off the mainland of Southern California stand five intriguing islands that make up Channel Islands National Park. On a clear day the islands are easily viewable from just about anywhere along the coastline, from Point Conception to the Santa Monica Mountains. Relatively few visitors make the trip by boat or by plane across the Santa Barbara Channel to the unspoiled shores of these five islands. Those who do encounter a windswept paradise rich in both human and natural history. In this remarkable volume, veteran landscape photographer Tim Hauf captures the flora, fauna, cultural sites, and dramatic landscapes of the little-known Channel Islands. Included are tiny Santa Barbara Island, with its teeming plant and marine life; Anacapa, renown for its lighthouse and sea caves; Santa Cruz, the largest and most diverse of the islands; Santa Rosa, former home of a robust Old West cattle ranch; and San Miguel, the westernmost, with its spectacular pinniped rookery and ghostly caliche forest. Also included is a chapter on the Channel Islands National Marine Sanctuary, a wonderland of aquatic marvels that encompasses an offshore distance of six miles from the pelagic edge of each island. This book includes nearly 150 outstanding photos, not only of the best- known sites, but those that are less familiar from spectacular vistas to absorbing close-ups. Tim Hauf s long-time collaborator Conger Beasley Jr. provides a descriptive text of the flora, fauna, and history. Channel Islands National Park and National Marine Sanctuary is a valuable introduction to the astounding natural wonders that flourish just off the coast of Southern California.

Tim Hauf is a nature/travel photographer who has traveled to many remote corners of the planet with a desire to create a better understanding and appreciation of the world around us through photography. His list of published books include unique destinations such as the Himalaya of Nepal; South America s remote Patagonia region at the southern tip of the continent; the rugged wilderness of northern Manitoba, Canada; and South Africa s remarkable World Heritage Sites. His photographs have appeared in numerous publications throughout the world, including Islands, Sunset, Asia Pacific Travel, Explore, Terre Sauvage, South Africa Times, and others. The Channel Islands have a special appeal to Tim, so close to the California mainland, yet a world apart with each island as well as the surrounding ocean environment having its own uniqueness. This is Tim s second book on Channel Islands National Park.

Conger Beasley, Jr.'s latest book is Messiah: The Life and Times of Francis Schlatter, a biography of the legendary faith-healer who lived in the American Southwest in the 1890s--to be published by Sunstone Press in 2008. Channel Islands National Park is his fifth photo-text collaboration with Tim Hauf.

Book Description Hauf Photography, Tim. Perfect Paperback. Condition: Very Good. A copy that has been read, but remains in excellent condition. Pages are intact and are not marred by notes or highlighting, but may contain a neat previous owner name. The spine remains undamaged. At ThriftBooks, our motto is: Read More, Spend Less. Seller Inventory # G0978821939I4N00