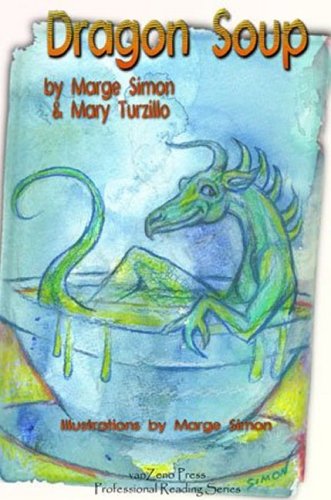 Dragon Soup is a winning combination of poetry, prose and art which explores the fascinating world of dragons.

Marge Ballif Simon freelances as a writer-poet-illustrator for genre and mainstream publications such as From the Asylum, Chizine, The Pedestal Magazine, Strange Horizons, Flashquake, Aeon, Vestal Review, and Flash Me Magazine. Books published in 2007 include a self-illustrated flash fiction collection, Like Birds in the Rain, Sam s Dot Publications and (also self-illustrated) Night Smoke, with Bruce Boston, Kelp Queen Publications. Her self illustrated poetry collection, Artist of Antithesis, was finalist for a Bram Stoker award in 2004. Her collaborative poetry collection with Charlee Jacob, VECTORS A Week in the Death of a Planet is contending for this year s Stoker. Marge is a Rhysling winner, and has been in the winner s circle twice recently for poetry at Balticon. She is former president of the Science Fiction Poetry Association and now serves as editor of StarLine. She and her husband, Bruce Boston, live in Ocala, FL, The City of Trees .
Mary Turzillo's Mars Is No Place for Children won the 1999 Nebula. An Old-Fashioned Martian Girl, her first novel, appeared in Analog. Publishing in Asimov

s, F& SF, Interzone, SF Age, Weird Tales, Oceans of the Mind, and Lady Churchill, she has over fifty poems in print, plus a chapbook, Galileo

s Blindness. and Your Cat & Other Space Aliens. She founded Cajun Sushi Hamsters and taught in NASA

s Science through Arts. Her favorite people include her son, Jack Brizzi, Jr., and her husband, writer-scientist Geoffrey A. Landis. Her cats claim that her fascination with the color turquoise is evidence of a forgotten adventure on an alien spaceship Review:

Dragon Soup is a captivating combination of prose, verse and art. Enter this world of dragons and you will be entertained with a delightful, frightening, humorous and thought-provoking experience. JILL BAUMAN, artist and illustrator --Jill Bauman

glib...uproarious...poignant. Turzillo and Simon thrive on the

as they present dragons with tongues in cheeks and wenches in tow. These are fairy-tale dragons dragged hissing and flaming into the 21st Century, complete with bold and saucy illustrations. The menu, of course, remains unchanged--villagers and family pets, with a side order of virgins. Come get some. -TYREE CAMPBELL, Managing Editor, Sam

s artwork for DRAGON SOUP will delight the child in all of us. -- ALAN CLARK, World Fantasy Award-winning co-creator of The Halloween Mouse --Alan Clark