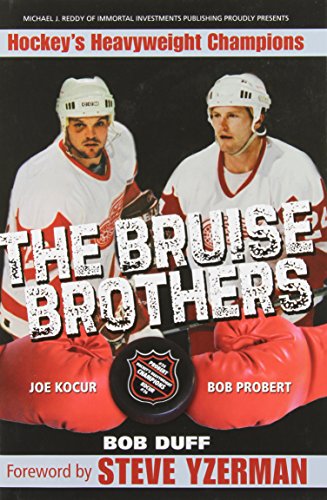 Two of the most prominent heavyweights in the NHL history, Kocur led the NHL with a Detroit club record 377 penalty minutes as a rookie in 1985-86, becoming the first Detroit rookie to ever lead the league in this department. Two years later, Probert earned 398 minutes of penalty minutes, leading the NHL. During the 1987-88 season, Probert scored 29 goals and was selected to play in the NHL All-Star Game. During his career he was a two-time 20 goal scorer. Kocur left the Red Wings in 1991, won a Stanley Cup with the New York Rangers in 1993-4, then returned to Detroit for the 1996-7 season, helping to win a pair of Stanley Cups for Detroit.

Book Description Immortal Investments Publishing, 2008. Hardcover. Condition: New. 100% buyer satisfaction guarantee. *Some of our items are sealed to protect them during shipping and to maintain their listed condition* International orders over 2lbs may be subject to shipping price adjustments. Seller Inventory # mon0000088373