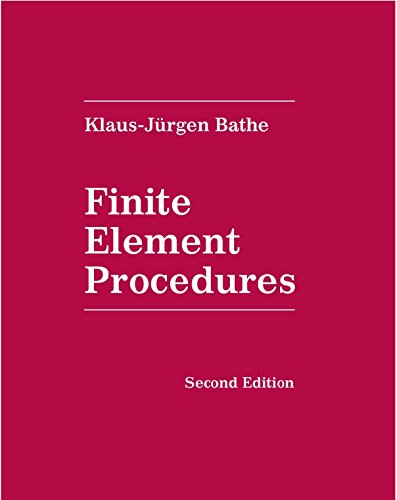 Finite element procedures are now an important and frequently indispensable part of engineering analyses and scientific investigations. This book focuses on finite element procedures that are very useful and are widely employed. Formulations for the linear and nonlinear analyses of solids and structures, fluids, and multiphysics problems are presented, appropriate finite elements are discussed, and solution techniques for the governing finite element equations are given. The book presents general, reliable, and effective procedures that are fundamental and can be expected to be in use for a long time. The given procedures form also the foundations of recent developments in the field.

Klaus-Jürgen Bathe is Professor of Mechanical Engineering at the Massachusetts Institute of Technology. He teaches and performs research in the areas of applied and computational mechanics of structures, fluids, and electromagnetics. Professor Bathe is also the Founder of the company ADINA R & D, Inc. where he leads the development of the ADINA system, used world-wide, for the analysis of structures, fluids, and multiphysics problems. He has published numerous articles, six textbooks and the book To Enrich Life. He is a co-editor of the international journal Computers and Structures, and the Editor of the proceedings of twelve M.I.T. Conferences on Nonlinear Finite Element Analysis and seven M.I.T. Conferences on Computational Fluid and Solid Mechanics. He has been honored by the ASME, ASCE, U.S. National Academy of Engineering, M.I.T., and many honorary doctorates for his teaching, his pioneering, fundamental and widely used contributions in computational mechanics, and for bridging the world between Academia and Industry.

Shipping: US$ 46.68
From United Kingdom to U.S.A.
Destination, rates & speeds